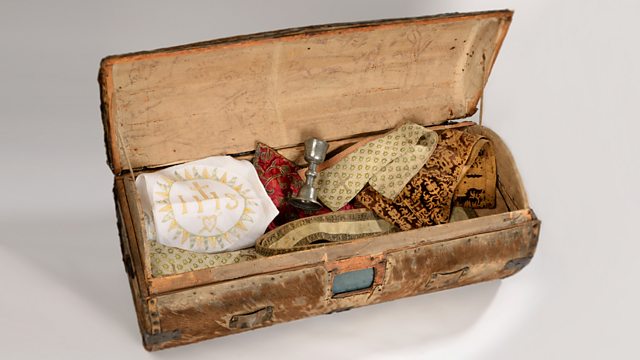 Neil MacGregor reveals deception and religion, cross-dressing and travelling salesmen, all unpacked via a pedlar's trunk. From May 2012.

Programme 14. DISGUISE & DECEPTION - Deception and religion, cross-dressing and travelling salesmen are all unpacked via a pedlar's trunk.

From London to Marrakech

The Flag That Failed

There were all sorts of people travelling the roads in Shakespeare’s day. Many were just tramps or petty thieves but walking amongst them were some people known as ‘pedlars’.

Although they operated on the fringes of society, pedlars were welcome arrivals in the towns and villages of England (land?) because, at a time when a village shop was not common, they brought with them all manner of fine wares for sale. Pedlars also brought with them news, scandal and gossip from other villages…and once they had made their sales, they would be off to the next village for more of the same.

This particular pedlar’s trunk holds a secret that its owner certainly wouldn't have wanted to be known to people in the street. For the owner of this trunk disguise wasn’t just a dramatic device used by actors on the stage, it was a matter of life or death.

This object is from Stonyhurst College

Watch a video of the Pedlar's Trunk

British Museum Blog: The role of the pedlar by Margaret Spufford, historian

Melvyn Bragg discusses what had happened in England to make diverse religions ‘tolerable’. What was the philosophy and politics behind the idea of toleration, and does it differ from tolerance?

Bettany Hughes tells the stories of women denied their families by the march of history. Tudor housewife Anne Askew's conversion to Protestantism tore her family apart.