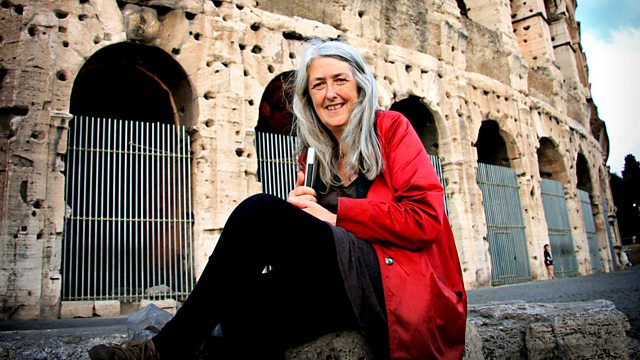 All Roads Lead to Rome

Meet the Romans with Mary Beard
Episode 1 of 3

Historical series looking at the Roman empire from the bottom up. Professor Mary Beard traces the story of several ordinary yet remarkable Roman citizens.

We still live in the shadow of ancient Rome - a city at the heart of a vast empire that stretched from Scotland to Afghanistan, dominating the West for over 700 years. Professor Mary Beard puts aside the stories of emperors and armies, guts and gore, to meet the real Romans living at the heart of it all.

In this programme, Mary asks not what the Romans did for us, but what the empire did for Rome.

She rides the Via Appia, climbs up to the top seats of the Colosseum, takes a boat to Rome's port Ostia and takes us into the bowels of Monte Testaccio. She also meets some extraordinary Romans: Eurysaces, an eccentric baker, who made a fortune out of the grain trade and built his tomb in the shape of a giant bread oven; Baricha, Zabda and Achiba, three prisoners of war who became Roman citizens; and Pupius Amicus, the purple dye seller making imperial dye from shellfish imported from Tunisia. This is Rome from the bottom up.

See all episodes from Meet the Romans with Mary Beard

See all clips from All Roads Lead to Rome (2)