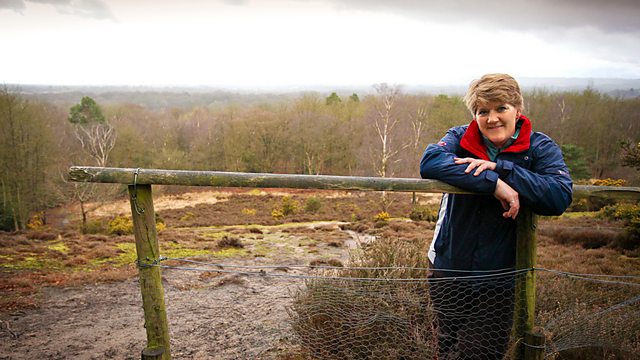 Almost 80 years since the Mass Trespass on Kinder Scout, Clare Balding joins ramblers from Manchester and Sheffield to mark this inspirational moment in walking history.

Almost 80 years since the Mass Trespass on Kinder Scout, Clare Balding joins ramblers from Manchester and Sheffield to mark this inspirational moment in walking history.

On April 24th 1932, around 400 ramblers from Lancashire set off from Bowden Bridge quarry near Hayfield to walk up onto the plateau of Kinder Scout, the highest point in the Derbyshire Peak District, in protest at the lack of the right to roam on open land. As they scrambled upwards towards the moorland plateau of Kinder, the trespassers were met and confronted by the Duke of Devonshire's gamekeepers. A group of ramblers from Sheffield, who had also set off that morning from Edale, did eventually reach the plateau and the two groups met up before turning and retracing their steps. The following day six of the Manchester ramblers were arrested and imprisoned, a move which was to outrage many people and serve only to highlight and sympathise with the ramblers cause, resulting finally in the Countryside and Rights of Way Act in 2000

Today Clare joins members of the Sheffield Ramblers, as well as Manchester-born broadcaster and avid walker, Mike Harding. They represent the two groups of ramblers that set off from Edale and Hayfield respectively, to take part in the Mass Trespass back in 1932. Leaving from Bowden Bridge, just as the original trespassers did, the group walk towards Kinder Reservoir and on to William Clough, where the Duke of Devonshire's gamekeepers were waiting. As they walk, the old cross-Pennines rivalry is still in evidence as the Sheffield walkers remind Clare that it was their group that had actually reached the top all those years ago. But everyone on that day 80 years ago shared a common passion for the hills and the moors around which, as folk singer Ewan Maccoll wrote, no one man should have the right to own.

The Mass Trespass of Kinder Scout was one of the most inspirational moments in the history of the rambling movement, inspiring walkers and campaigners of access to open land for years to come. It wasn't the
only trespass to take place - there were others before it and many more inspired by it. But it lives on in the memory of all those who believe that all should have the right to roam.