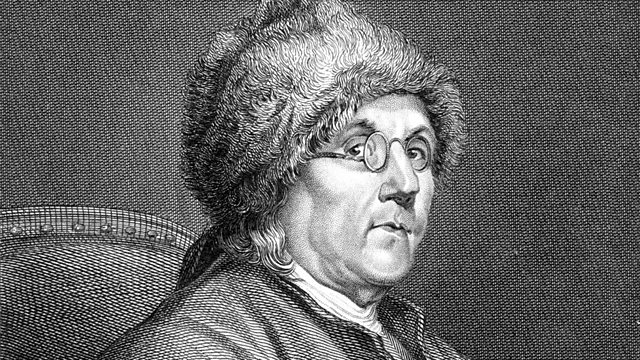 Melvyn Bragg and his guests discuss the life and work of the scientist, writer, printer, diplomat and American founding father Benjamin Franklin.

Melvyn Bragg and his guests discuss the life and work of Benjamin Franklin. A printer, statesman, diplomat, writer and scientist, Franklin was one of the most remarkable individuals of the eighteenth century. His discoveries relating to the nature of electricity, and in particular a celebrated experiment which involved flying a kite in a thunderstorm, made him famous in Europe and America. His inventions include bifocal spectacles, and a new type of stove. In the second half of his life he became prominent as a politician and a successful diplomat. As the only Founding Father to have signed all three of the fundamental documents of the United States of America, including its Declaration of Independence and Constitution, Benjamin Franklin occupies a unique position in the history of the nation. With:Simon MiddletonSenior Lecturer in American History at the University of SheffieldSimon NewmanSir Denis Brogan Professor of American History at the University of GlasgowPatricia FaraSenior Tutor at Clare College, University of Cambridge.Producer: Thomas Morris.