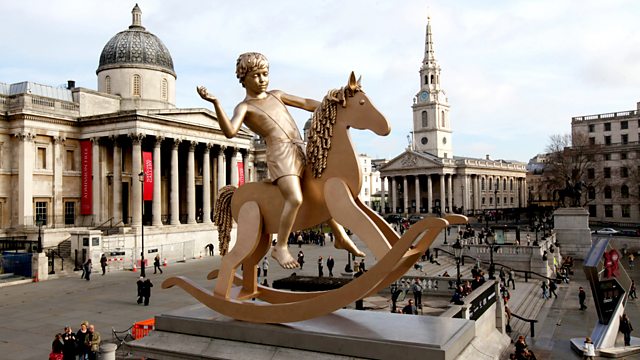 Mark Lawson reports on the the latest art-work on the Fourth Plinth in Trafalgar Square, interviews Peter Ackroyd on Wilkie Collins, and reviews the play In Basildon.

Mark reports on the latest art-work to adorn the Fourth Plinth in Trafalgar - a golden boy on a rocking horse designed by Elmgreen and Dragset. and unveiled today by Joanna Lumley, who discusses the work.

Peter Ackroyd reflects on his biography of Wilkie Collins, author of the Moonstone and The Woman in White, and friend of Charles Dickens, whose personal life was full of secrets.

In Basildon is a new play by David Eldridge about a close knit Essex family coming to terms with a recent death. Writer Tim Lott gives his verdict.

And Mark speaks to two of the ten composers taking inspiration from Handel's Water Music for the Queen's Diamond Jubilee celebrations. The new works will be performed as part of the 1000 boat flotilla travelling down the Thames on June 3. Debbie Wiseman, whose film scores include Tom and Viv and Wilde, and Christopher Gunning, whose music includes the theme for Poirot, talk about the challenges of re-imagining Handel's famous score.