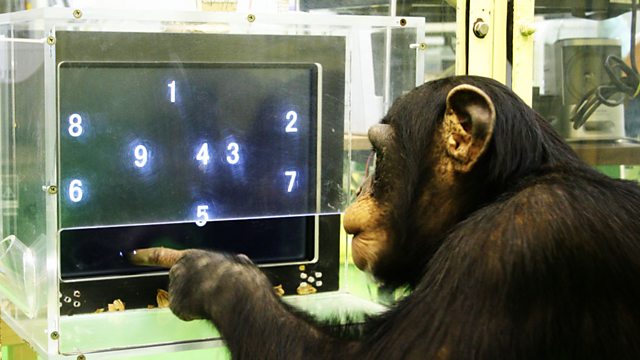 From skateboarding dogs to chimp maths geniuses, Liz Bonnin searches for the planet's most intelligent animals, and John Humphrys puts a goldfish through its paces on Mastermind.

For centuries, the idea of intelligent animals struck most people as ridiculous. But not any more - the latest science reveals that animals are a lot smarter than we thought.

From skateboarding dogs to chimp maths geniuses, Liz Bonnin embarks on a worldwide search for the planet's most intelligent animals, devising some ingenious IQ puzzles and even putting herself to the test to find out.

Liz gets creative with dolphins, shares a eureka moment with orangutans and defends the reputation of the human race when she goes head-to-head with a chimp genius in a test of maths and memory. There is an octopus escapologist, John Humphrys puts a goldfish through its paces on Mastermind, and Tillman the skateboarding dog wows crowds in Los Angeles.

Prepare to be amazed, entertained and even outwitted by the world's Super Smart Animals.