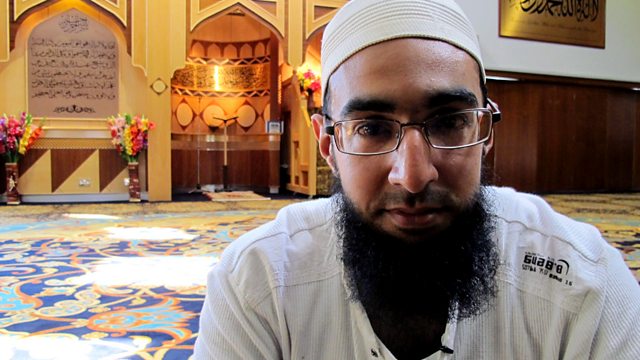 Members of different faiths search for the perfect partner, as Muslim singletons Zubair, Naila and Dimpy try to overcome being relationship novices and find 'the one'.

Looking for love is tough at the best of times and it can be even harder when your pool of potential partners is small. Welcome to the world of being young, single and religious. This is looking for love as it's rarely been seen on TV before - with religion in play there are a whole new set of rules and it can be seriously tough to find 'the one'. Strictly Soulmates takes a fun, entertaining and emotional look at the real life trials and tribulations of a group of singletons trying to find their perfect match from four different religions: Evangelical Christian, Hindu, Muslim and Jewish.

If you're young, single and Muslim, you're not actually allowed to date, so finding a partner involves lots of help from mum, dad, auntie and uncle too. We take an engaging look at the highs and lows of three Muslim singletons, who have never even had a relationship before, as they begin their journey's to find 'the one'. As one of our singletons says 'it's a bit like blind date, but your mum is Cilla Black'.

23-year-old Zubair has just graduated from Manchester University. He's planning to move to Pakistan later in the year, but first he wants to find a British Muslim wife to take with him. It doesn't help that he's never even sat down to talk to a girl on his own before, and on top of that he's worried his strict Muslim beard could put some girls off. He's not expecting Angelina Jolie, but will Zubair find himself a wife before he steps on the plane?

Naila has just turned 22. As the eldest daughter of the family she is now expected to have an arranged marriage, so her mum is on the hunt. But arranged or not she wants to find the man of her dreams, and preferably one with a beard. After months of searching Nila's mum arranges a formal meeting with a potential husband. But what happens when you reject the boy and his family when you've only met them once, and how do you know what you're looking for in your man when you've never even been out with a boy before.

Tabassum - or Dimpy for short - is a 32-year-old who has never had a boyfriend. It's not that she is short of suitors - Dimpy's already turned down 60 potential husbands who haven't measured up to her very long list of priorities in a man. If they're not Muslim, middle class, Pakistani and a doctor, they're not worth considering. Luckily for Dimpy, her cousin and aunt are on hand to deliver a few home truths, but can she take this advice on board and finally find a man?

See all episodes from Strictly Soulmates