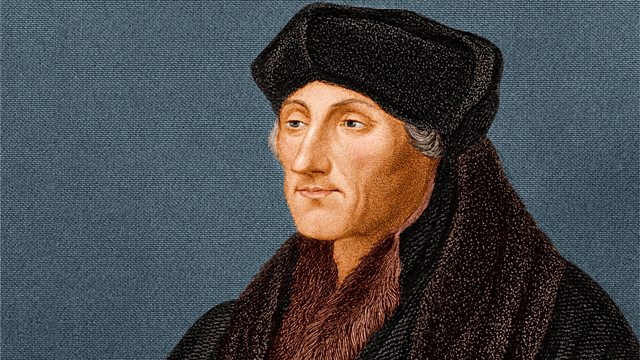 Melvyn Bragg and his guests discuss the life and work of the Dutch humanist scholar Desiderius Erasmus, one of the most significant figures of the Renaissance.

Melvyn Bragg and his guests discuss the life and work of the Dutch humanist scholar Desiderius Erasmus. In his lifetime Erasmus was almost universally recognised as the greatest classical scholar of his age, the translator and editor of numerous Latin and Greek texts. But above all he was a religious scholar who published important editions of the Bible which expunged many corruptions to the texts of the Scriptures. He was an outspoken critic of the Church, whose biting satire on its excesses, In Praise of Folly, was famed throughout Europe.When the Reformation began in 1517, however, Erasmus chose to remain a member of the Catholic Church rather than side with Martin Luther and the reformers, and a few years later he engaged in a celebrated debate with Luther on the subject of free will. Through his writings on the Church, on education and the wide gamut of humanist scholarship, Erasmus is remembered today as one of the greatest thinkers of the northern Renaissance.With:Diarmaid MacCullochProfessor of the History of the Church at the University of OxfordEamon DuffyProfessor of the History of Christianity at the University of CambridgeJill KrayeProfessor of the History of Renaissance Philosophy and Librarian at the Warburg Institute, University of London.Producer: Thomas Morris.

The An Lushan Rebellion