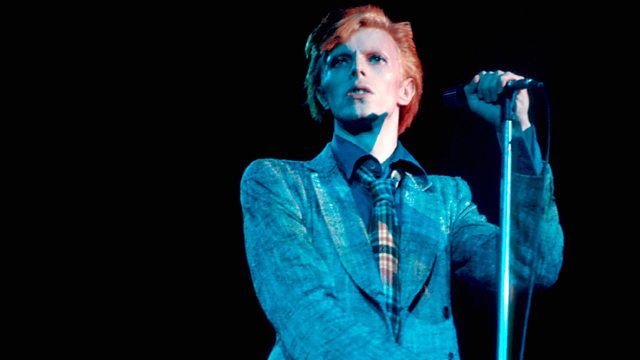 Another chance to hear the first programme, recorded before Bowie's surprise comeback this year, as Johnnie Walker looks at Hunky Dory and Aladdin Sane, with David Hepworth.

Another chance to hear the first programme in the Long Players series, recorded before David Bowie's surprise comeback this year.

Johnnie Walker looks at some favourite classic albums. This week it's David Bowie's Hunky Dory and the follow up to Ziggy Stardust - 'Aladdin Sane'.

Both produced by Ken Scott (with help from Bowie as the 'actor' on 'Hunky Dory' and arrangements by Mick Ronson on 'Aladdin Sane') at the legendary Trident Studios during 1971 & 1972, 'Hunky Dory' was the first album to feature the subsequent Spiders From Mars line up and 'Aladdin Sane' followed the breakthrough 'Ziggy Stardust' album and fitted between legs of the famous tour.

Very much a fan favourite, the first album combines the huge hits 'Changes' and 'Life On Mars' with cult classics like 'Kooks' and 'The Bewlay Brothers' and pays sideways tribute to heroes like Bob Dylan, Andy Warhol and the Velvet Underground.

'Aladdin Sane' is a tougher sound with 'Drive In Saturday', 'Panic in Detroit', a cover of 'Let's Spend The Night Together' and 'The Jean Genie' being the stand out tracks.

The programme features highlights of the albums, with comment and cultural history from Johnnie and broadcaster and critic David Hepworth alongside archive interviews with many of the key players.