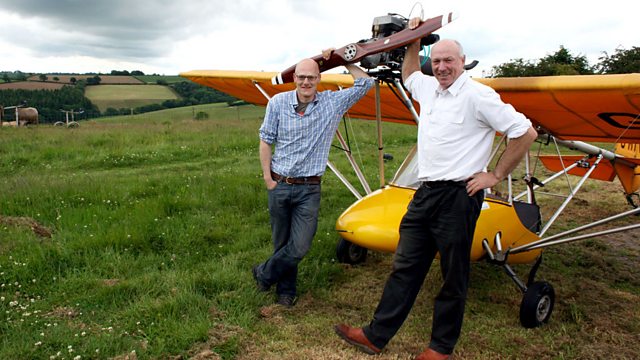 The Real Magnificent Men in Their Flying Machines: A Wonderland Film

Documentary following three teams of microlight enthusiasts who navigate their way across Britain armed only with a map and compass, hoping to win the Round Britain Rally.

Three days flying around the UK in flimsy machines whose engines can cut out at any time: welcome to the mad, bad and sometimes downright dangerous world of competitive amateur microlighting in the 'Round Britain Rally'.

For those with the daring, skill and sheer nerves to take it on, the Rally is the ultimate test, where the aim is to fly around as much of the country as possible. This is flying at its most basic - and most exhilarating.

This film follows three teams of obsessive microlight enthusiasts who navigate their way across Britain armed with a map and compass, sleeping under the wing, and doing their best to keep their aircraft in one piece - while at the same time clocking up more miles than everyone else.

Microlighters wax lyrical over the poetry of the skies, but they all have tales of brushes with death. Anxious and despairing families look on in resignation as their much loved men folk choose to exercise what seems an irrepressible death wish.

Disaster is never much more than a stalled engine away. As one of the pilots says: 'You're putting your life in the hands of what is effectively a chainsaw attached to a deck chair.' But that won't stop these enthusiasts from taking to their magnificent flying machines in an attempt to capture the true spirit of amateur aviation.

See all clips from The Real Magnificent Men in Their Flying Machines: A Wonderland Film (2)