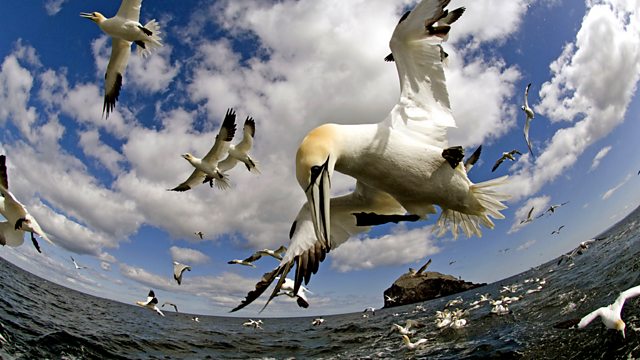 The nature documentary series departs on its grand European tour, as cranes and geese soar over Venice, the white cliffs of Dover, Edinburgh and the Rock of Gibraltar.

Earthflight departs on its grand European tour, using a host of techniques including taking extraordinary footage from microlites as they fly alongside imprinted birds.

Among other wonders, cameras soar with cranes and geese over Venice, the white cliffs of Dover and Edinburgh. White storks leave Africa and struggle to reach Istanbul, the gateway to Europe, while cranes take an easier route over the monkey-guarded Rock of Gibraltar.

In France, the white horses of the Camargue make a splash around the new arrivals. In Rome, the heat of the city lures 20 million starlings that perform nature's greatest aerial display to outwit peregrines. In Hungary, sand martins grab mayflies from the air, and at Bass Rock, gannets create Britain's greatest natural spectacle as they dive in exquisite slow motion.

The story takes an emotional turn as storks and swallows wait for their partners to return and indulge in a spot of DIY to impress. Finally, geese touch down in Svalbard to raise a family. To protect their young, a squadron of birds assemble to see off polar bears.

With views of birds flying over the Loire Valley, London docklands and the bulb fields of Holland, this is Europe seen as never before.

See all episodes from Earthflight

See all clips from Europe (2)