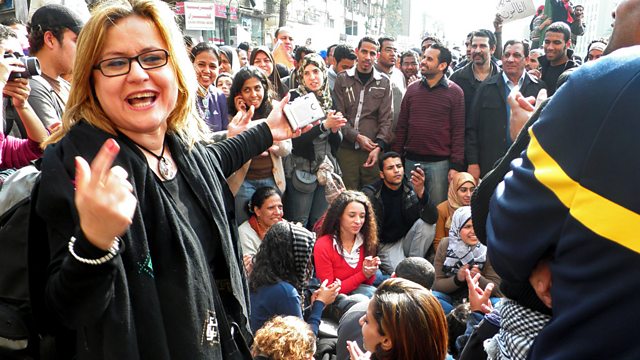 Reem Kelani on the role of music in Egypt's revolution in 2011, and how the songs of Sayyid Darwish sustained protestors in Tahrir Square, almost a century after they were written.

Palestinian singer Reem Kelani has a unique perspective on the tumultuous events in Egypt in early 2011 - while in Cairo to research the music of Sayyid Darwish (1892-1923), she found herself watching history unfold. Caught up in the revolution, she saw Darwish's music taking on a new and urgent topicality, alongside the creations of contemporary songwriters.

Reem recorded protestors raising their voices against Mubarak, by singing Darwish's songs - not only those dealing with nationalism and social justice: even love songs by Darwish moved protestors during the days of mass protest. Protestors also sang songs by Egyptian greats such as Sheikh Imam, delighting in a body of artistic work which had long been denied them because it was deemed subversive. Many adapted folk songs, and at the same time, contemporary musicians created new compositions, some of them capturing brilliantly the spirit of the moment. But in Tahrir Square, the overwhelming reality was of a host of unknown and unsung singing heroes who led those around them into a musical formulation of pent-up political frustration.

In a return visit to Cairo for Radio 4 Reem met up with the activists, poets and musicians with whom she spent time on Tahrir Square in the early months of 2011, to explore the role of music in the Revolution and Darwish's importance to Egyptians now. She spoke to them about the creative spirit of the popular uprising, and the underground music that accompanied the protests. Reem arrived a week before elections in November, and found anger but also optimism and determination that Egypt will set itself on the track to democracy after years of dictatorship and decline.