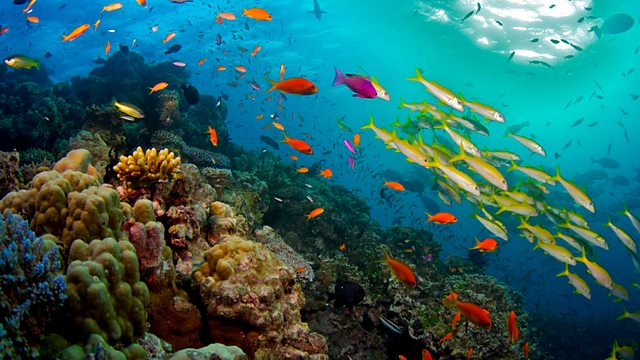 Monty Halls explores Australia's Great Barrier Reef, examining the vast, complex structure of the coral reef itself and the wildlife that lives on it.

Three-part series exploring Australia's Great Barrier Reef, one of the natural wonders of the world and the largest living structure on our planet.

Monty Halls explores its full 2,000-kilometre length, from the wild outer reefs of the Coral Sea to the tangled mangrove and steaming rainforest on the shoreline, from large mountainous islands to tiny coral cays barely above sea level, from the dark depths of the abyss beyond the reef to colourful coral gardens of the shallows.

Along the way, he experiences the reef at its most dangerous and its most intriguing, and visits areas that have rarely been filmed, from the greatest wildlife shipwreck on earth to the mysterious seafloor of the lagoon, where freakish animals lurk under every rock.

The first film explores the complex structure of the coral reef itself and the wildlife that lives on it. So vast it is visible from space, the reef is actually built by tiny animals in partnership with microscopic plants. It is a place full of surprises that is always changing, responding to the rhythms of weather, tide, sun and moon.

Within this magical and intensely crowded world, this episode reveals how the amazing reef creatures compete and cooperate - from deadly fish-hunting snails to sharks that can walk on land, fighting corals and parrot fish that spin sleeping bags every night.

Remote cameras, cutting-edge underwater macro and digital time-lapse photography have captured many sequences which have never been filmed before, providing completely fresh perspectives on this extraordinary natural wonder.

See all clips from Nature's Miracle (17)