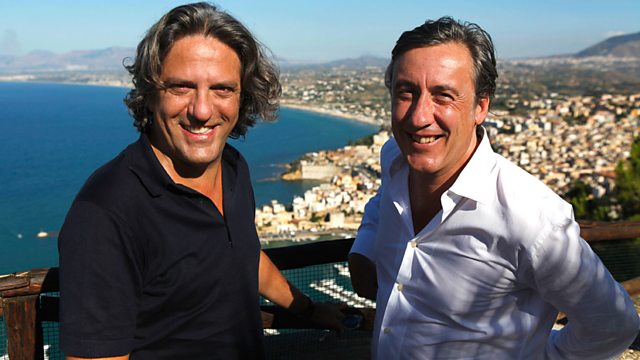 Andrew Graham-Dixon and Giorgio Locatelli explore Sicily. In Palermo, they visit the markets, a typically Sicilian chapel hidden amongst narrow streets and the Zisa Palace.

In the first episode, Andrew Graham-Dixon and Giorgio Locatelli take viewers on a journey into the heart of Sicily and introduce one another to the things they love about the island.

Their first stop takes them to Giorgio's friend Vittorio and his restaurant near the seaside village of Porto Paolo. There is no menu - you are served whatever is best that day. It is Giorgio's favourite restaurant in the world. For him, the larger-than-life Vittorio represents the best of Sicily.

Sicily may be less famous for art than its northern neighbours, but Andrew wants to change that. He takes Giorgio to see one of his favourite works of art in the capital Palermo, a typically Sicilian chapel hidden away down one of the city's many narrow streets. Created by the Palermitan sculptor Giacomo Serpotta, for Andrew it is a stunning example of the Sicilian approach to art and architecture.

Palermo is an urban jungle, and Andrew and Giorgio attempt to navigate the traffic to visit the colourful markets of this buzzing city. Like the rest of Sicily, food is at the heart of everyday life here, and they sample one of the city's signature dishes - pasta with fresh sardines.

They also travel back to the 12th century and enter the Arab world while visiting the Zisa palace, check out the gilded Palatine chapel and attend a traditional wedding, and explore some of the city's more surprising attractions, such as the Unesco-protected Cuticchio Puppet Theatre.

Plus the pair explore how, amongst the buzz and great beauty of the island, the shadowy presence of the mafia lurks around almost every corner.

To round off their stay in Palermo, Giorgio and Andrew have one last drink at a Palermitan bar before heading off on the next leg of their journey through Sicily.

See all episodes from Sicily Unpacked 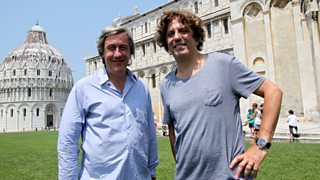