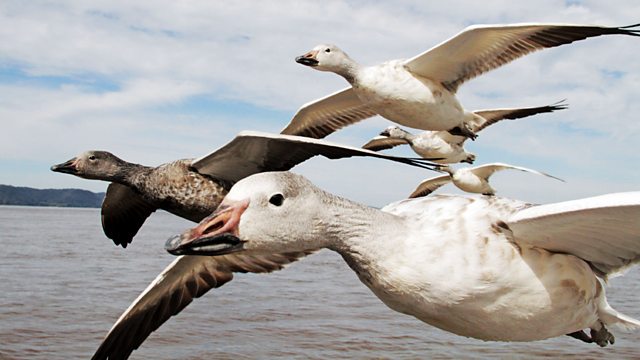 Documentary giving a bird's-eye view of some of the world's natural spectacles. This episode takes flight across North America, as snow geese fall prey to bald eagles.

Take a breathtaking flight on the wings of birds across six continents and experience some of the world's greatest natural spectacles from a bird's-eye view.

Fly across North America and become part of a flock of millions of snow geese as they discover what it's like to be on the hit list of America's national bird: the bald eagle. Glide under San Francisco's Golden Gate Bridge with pelicans and experience the sensation of being on the back of a bird as you are flown through Monument Valley, the Grand Canyon and New York.

In California, pelicans reveal devil rays that perform astonishing somersaults and find bizarre grunion fish that wriggle ashore to spawn. In Alaska, bald eagles swoop among brown bears fishing for salmon. On the Great Plains, cowbirds duck and dive under the feet of fighting bison.

As we see the world through the eyes of birds, egrets show us the extraordinary habits of dolphins that strand themselves to feed, millions of shorebirds rendezvous with prehistoric creatures emerging from the sea, and gulls take us to Mono Lake, where they catch flies by chasing them with open mouths.

The dream of flying like a bird is nothing compared to the extraordinary reality.

See all episodes from Earthflight

See all clips from North America (2)