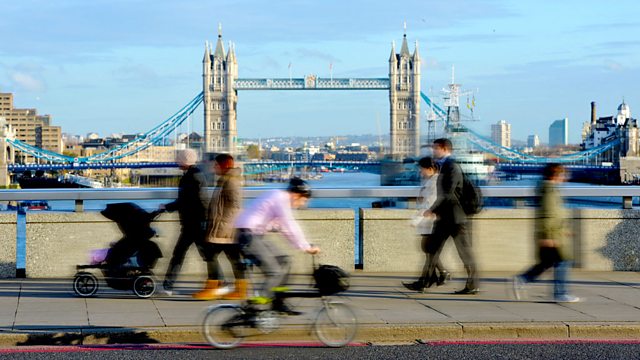 Book of the Week Craig Taylor - Londoners
Episode 2 of 5

London through the voices of Londoners - a Wiccan priestess and a rickshaw rider. Read by Lesley Manville and Tom Brooke.

Craig Taylor's book has given new voice to Londoners; the rich and the poor, the native and the immigrant; men and women. It continues an oral tradition that goes back to Henry Mayhew's London Labour and the London Poor, published in the mid-nineteenth century.

Taylor gives us the squatter and the teacher; the bicycle mechanic and the registrar; the plumber and the rickshaw rider; the lost property clerk and the Wiccan priestess, who casts the remnants of her spells into the Thames.

These remarkable snapshops of the city dwellers are moving, funny and informative.

"What makes Londoners as valuable as any sociological treatise is Taylor's appreciation of the ways in which his subjects are themselves surveying, analysing and theorising the turbulent city in which they live.... At more than 400 pages, the book could easily have been twice as long... But this remains a remarkable volume, from the heaving, contradictory energy of its countless funny, terrifying, epic stories" Sukhdev Sandhu in The Guardian.