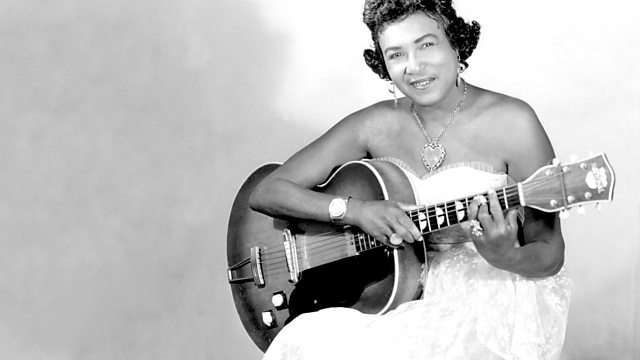 When the Levee Breaks

Mark Lamarr explores the life of blues woman Memphis Minnie, known for her guitar skills, her rowdy ways and the song When the Levee Breaks.

Mark Lamarr looks at the little-known story of Memphis Minnie, known for her guitar skills, her rowdy ways and the song 'When the Levee Breaks' a musical celebration of a key moment in Blues history.

'Levee', later made famous by Led Zeppelin and Dylan, was released in 1929, long before guitars found amplification, in reference (like many blues songs of the time), to the great Mississippi flood of 1927.

The flood was a huge factor in the Migration of African Americans into what would become the great RnB and Blues towns of Detroit, Memphis & Chicago. When the Levee Breaks is its most famous telling.

Neither born in Memphis nor called Minnie, the musician who wrote and recorded it travelled that now well worn blues journey both physically and musically in the first wave of blues musicians emerging from the Delta in the late 20s.

When the Levee Breaks was one of over two hundred songs written by Minnie during her lifetime, many are blues classics. Though her story has been largely ignored when compared to Robert Johnson, Leadbelly and other Blues artists of the time.

In a journey that starts along the banks of the Mississippi in a post Katrina New Orleans and ends in the promised land of the Blues, Chicago, Mark Lamarr explores her story, the flood itself and the development of the Blues that emerged around the Great Migration.