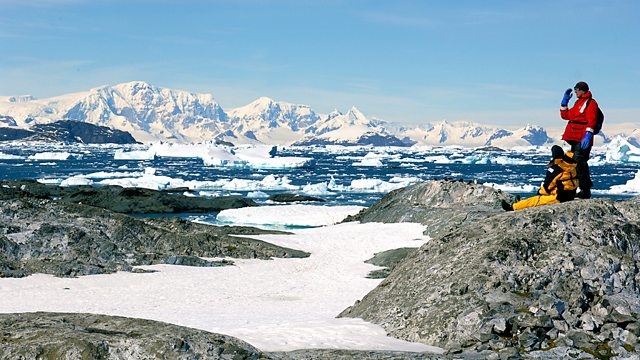 The Essay The Antarcticans
Episode 3 of 5

Former dog driver John Sweeny recounts his last husky-hauled sledge trip within Antarctica and the mission to find his team of dogs a new home, 8,000 miles to the north.

To mark the centenary of Roald Amundsen's arrival at the South Pole (to be followed a month later by Captain Scott), this series of the Essay is presented by professionals who have lived and worked in Antarctica.

In the mid-1990s John Sweeny was a Field Assistant at Rothera Base on the Antarctic peninsula when fate decreed he should drive "The Last Huskies" ever to romp across the continent. The recently-signed Antarctic Treaty dictated that all "non-indigenous species" had to be removed.

"In the past, drivers had been ordered to shoot redundant huskies. I'd done this myself. A bullet to the back of the head for the dog - and a lifelong sense of guilt for me at such a heartless betrayal of trust. But now the eyes of the world were upon us and a more sensitive scenario had to be found."

Realising it would be decidedly un-British to put the dogs down, a plot was hatched for John to take his team to a new life with an Inuit community on the shores of Canada's Hudson Bay.

He recounts their last big adventure north which tragically transformed into a life and death struggle for the huskies.

The words of Amundsen's companion Helmar Hansen speaking a century earlier, echo in his head:
"Dogs like that - who share man's hard times and strenuous work - cannot be looked upon merely as animals. They are supporters and friends. There is no such thing as making a pet out of a sledge dog, these animals are worth much more than that."

John Sweeny is now a forester in Snowdonia.

How Not to Make Ice Cream in Antarctica—The Antarcticans