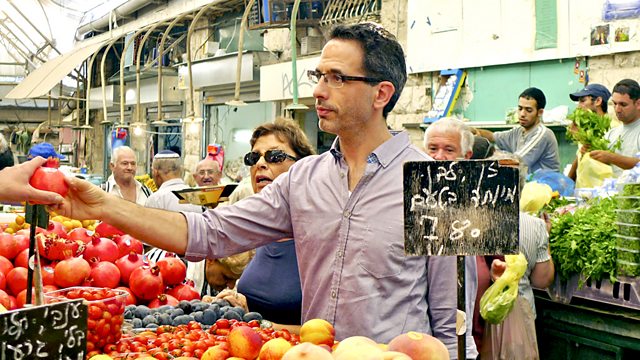 Jerusalem on a Plate

Chef Yotam Ottolenghi returns to his home town of Jerusalem to discover the hidden treasures of its rich and diverse food culture, from hummus to fiery zhoug and kibbeh soup.

Internationally-renowned chef Yotam Ottolenghi returns to his home town of Jerusalem to discover the hidden treasures of its extraordinarily rich and diverse food culture. He meets and cooks with both Arabs and Jews in restaurants and at home who draw on hundreds of years of tradition to create the dishes that define the city, and explores the flavours and recipes that have influenced his palate. From the humble street foods of hummus and falafel to the cutting edge of Jerusalem cuisine, Yotam uncovers the essence of what makes the food of Jerusalem so great.

Starting in the Old City, Yotam samples the Palestinian fast foods like falafel and hummus that he remembers from his childhood. This is the food that has been feeding the throngs of pilgrims who have visited the city for centuries - loved alike by Jew, Arab and Christian. In the west of the city, Yotam discovers how waves of immigration from the Jewish diaspora from such varying origns as Poland, Hungary, Morocco and Turkey have each brought with them a different flavour, ingredient or technique that adds to the ever-evolving Jerusalem cuisine, keeping it fresh, varied and exciting. Here he eats stuffed aubergine with cinnamon, tries fiery zhoug from Yemen and learns how to make kibbeh soup, a staple of the Sephardic Jewish kitchen.

In both Arab and Jewish homes he discovers the family recipes that have been passed down through generations - recipes such as kollage, a sweet sheep's cheese pastry, or swiss chard with cracked wheat and pomegranate molasses. Finally, he visits some of Jerusalem's trailblazing chefs, discovering how modern Jerusalem cuisine is drawing from all of these influences to create food that is both locally sourced and true to its culinary roots, and at the same time truly innovative. Collaborating with these chefs in the kitchens, Yotam adds his own distinctive flair to the dishes they create.

Through Yotam's eyes we are given an insight into the depth and breadth of the food of Jerusalem and how it is still changing and evolving. Much has changed since his childhood in Jerusalem, and politics is never far away, but Yotam finds that food is sometimes the one area where the different communities can come together.