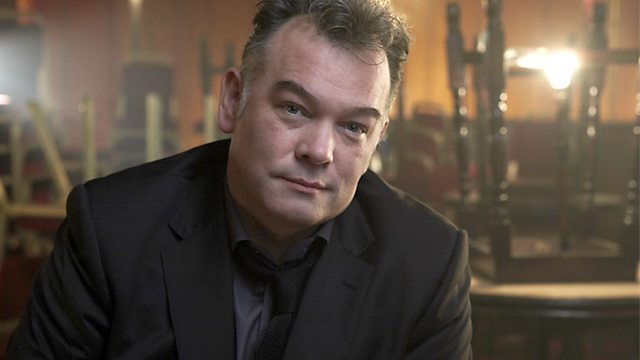 It's Got Bells On

As he explores why people do it and its history, Stewart Lee discovers The Morris is a happening dance sensation, sexy as salsa and becoming, again, a potent cultural phenomenon.

'Strictly'; 'Britain 's Got Talent'; 'So You Think You Can Dance'... there is extraordinary enthusiasm for dance in many forms. But there's one dance that never gets featured, and its England's own - the Morris.

Stewart Lee puts this to rights in 'It's Got Bells On' and the usual scornful jibes (such as,"There's a morris side crossing the road; which do you run over, the dancers or the accordion player? The accordionist, because you should always put business before pleasure") won't appear because though he's a comedian Stewart is an enthusiast for English traditional music and dance. This is the stand up who had the Black Swan Rappers (dancers not MCs) open for him at a gig in Yorkshire, and the Forest of Dean Morris Men at his wedding reception.

A couple of years back even The Morris Ring said the tradition would have come to an end in 20 years because no young people were joining. But Stewart discovers that the best young folk musicians, such as Jim Moray, Tim van Eyken and Laurel Swift all dance and all develop the form, that hip hop and morris merge in the work of The Demon Barbers and that contemporary choreographers are turning to the tradition. When danced by athletic young men, or women such as the Belles of London City (in their corsets) the morris becomes as sexy as salsa, as fearsome as flamenco.

Stewart hears from Ashley Hutchings and John Kirkpatrick, who gave a boost to the revival in the 1970s with classic albums 'Morris On' and 'Battle of the Field', when morris went electric. There is lots of fantastic music, including some from William Kimber, from whom Cecil Sharp collected his first morris tunes in 1899. All this, and a quick glance at rapper and clog dancing, too.

Dancing In The Rain: Gene Kelly

Fred Astaire: Puttin' On The Style