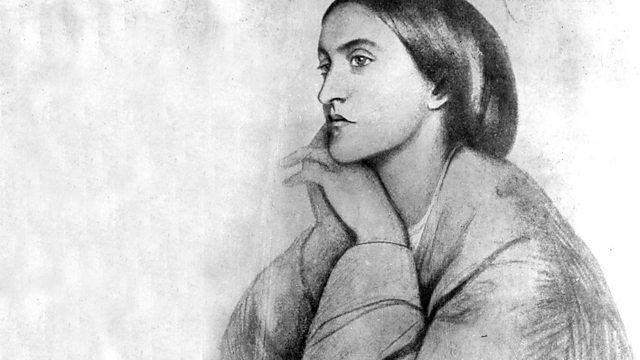 Melvyn Bragg and guests discuss the life and work of the Victorian poet Christina Rossetti.

Melvyn Bragg and his guests discuss the life and work of the Victorian poet Christina Rossetti. Rossetti was born into an artistic family and her siblings included Dante Gabriel, one of the leading lights of the Pre-Raphaelite Brotherhood, to whose journal, 'The Germ', Christina contributed poems. She was a devout Anglican all her life and her religious beliefs are a recurring theme in her work. Christina never married, although she was engaged twice - one of her fiancés was the Pre-Raphaelite painter, James Collinson. She spent her time writing and volunteering for charitable works. It is said she even considered going to the Crimea with Florence Nightingale, but in the end ill health prevented her from doing so. Best known for her ballads and long narrative poems, she also wrote some prose and children's verses. Christina was admired by contemporaries including Swinburne, Tennyson and Elizabeth Barrett Browning. Her work was to have an influence on later writers such as Virginia Woolf and Gerard Manley Hopkins. Rossetti's poetry has a spirituality and sensitivity that has led to her redisovery in recent decades, not least by feminist critics who praise her powerful and independent poetic voice. With:Dinah BirchProfessor of English Literature and Pro-Vice Chancellor for Research at Liverpool University Rhian WilliamsLecturer in Nineteenth-Century English Literature at the University of GlasgowNicholas ShrimptonEmeritus Fellow of Lady Margaret Hall, University of Oxford Producer: Natalia Fernandez.