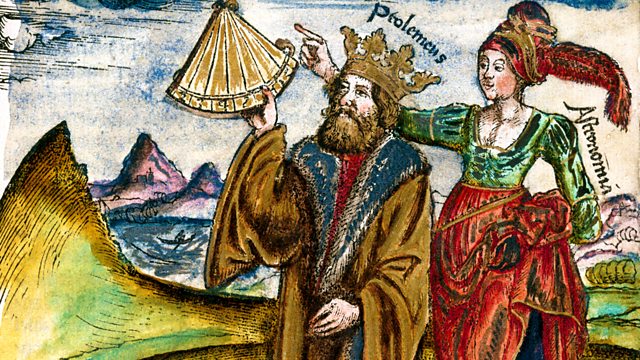 Melvyn Bragg and his guests discuss the last of the great Greek astronomers of antiquity, Ptolemy, and his influence on ancient and medieval astronomy.

Melvyn Bragg and his guests discuss the ancient Greek astronomer and mathematician Ptolemy, and consider how and why his geocentric theory of the universe held sway for so many centuries. In his seminal astronomical work, the Almagest, written in the 2nd century AD, Ptolemy proposed that the Earth was at the centre of the universe and explained all the observed motions of the Sun, Moon, planets and stars with a system of uniform circular motions which he referred to as 'epicycles'. But Ptolemy was a polymath and did not confine his study of the stars to mathematical equations. He was also interested in astrology and his book on this topic, the Tetrabiblos, tackled the spiritual aspects of the cosmos and its influence on individual lives and personalities.Ptolemy's model of the universe remained the dominant one for over a thousand years. It was not until 1543, and Copernicus's heliocentric theory of the world, that the Ptolemaic model was finally challenged, and not until 1609 that Johannes Kepler's New Astronomy put an end to his ideas for good. But how and why did Ptolemy's system survive for so long?With:Liba TaubProfessor of History and Philosophy of Science at Cambridge UniversityJim BennettDirector of the Museum of the History of Science at the University of OxfordCharles BurnettProfessor of the History of Islamic Influences on Europe at the Warburg Institute, University of LondonProducer: Natalia Fernandez.