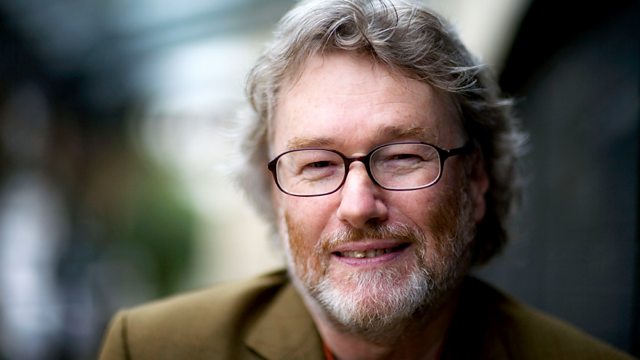 Iain Banks talks to James Naughtie and readers about his ground-breaking first novel The Wasp Factory. Recorded at the National Library of Scotland, Edinburgh.

Iain Banks meets James Naughtie and readers at the National Library of Scotland in Edinburgh to talk about his debut novel The Wasp Factory, first published in 1984.

This shocking novel is an insight into the life of sixteen year old Frank, a brutal and disturbed teenager who enjoys killing animal and insects all too much. But Frank isn't alone in his madness - his brother Eric has just escaped from an asylum, and is gradually making his way back home to the remote island house Frank shares with his father Angus.

Banks' major achievement is to make the reader feel sorry for this character of Frank and as one audience member acknowledges, to make us laugh.

Iain talks about how he drew on his own childhood experiences of dam-building, kite-making and experimenting with explosives to create the character of Frank - but that is where the similarities end. Iain's own boyhood was a happy one, it was purely his desire to shock as an emerging author that led him to Frank. He says he identifies with none of the characters in the story and describes his writing in the Wasp Factory as 'exaggeration'.

Readers who know the Wasp Factory will remember its startling ending, where it is disclosed that Frank is not all he seems, and Iain reveals how this part of the story came to him.