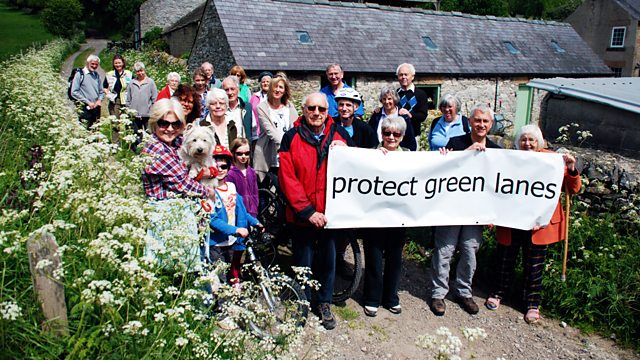 Tales from the National Parks
Episode 2 of 3

In the Peak District, film-maker Richard Macer follows the story of a campaign to stop 4x4 drivers and trailbikers motoring along the local villages' green lanes.

The national parks are Britain's most treasured landscapes, but they are increasingly becoming battlefields. They were designated 60 years ago as places for everyone, but is that still the case? In this series, the award-winning film-maker Richard Macer spent a year amid conflicts in three different parks, on a journey to discover who they are really for.

In each park the stories are very different, but there is something that unites them all - fiercely divided communities who are prepared to fight in order to preserve their right to enjoy the countryside. For each film Macer has secured access to the National Park Authority - an organisation which looks after the landscapes and decides upon planning matters. In all these stories the park authorities have a key role to play in trying to find amicable solutions to the problems which confront them.

A war is breaking out in the charming villages of the Peak District, with walkers, horseriders and residents angry at 4x4 drivers and trailbikers motoring up and down the green lanes for pleasure. So an 80-year-old retired primary school teacher decides to launch a campaign to get the motorists banned from a lane in her village of Great Longstone. Over the next few months the campaign snowballs, and more and more villages decide they've had enough of the off-roaders on their lanes.

Macer filmed for over a year in the Peak District and was granted exclusive access to the inner workings of how the park is run. Will the Peak District Park Authority bow down to public pressure or will it side with the off-roaders?

Loch Lomond and the Trossachs

See all episodes from Tales from the National Parks

See all clips from The Peak District (2)