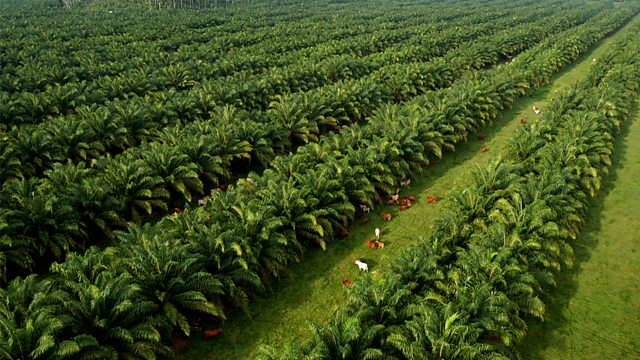 A traditional cooking oil and a controversial food ingredient found in everything from margarine to chocolate to animal feed. Dan Saladino journeys into the world of palm oil.

Used increasingly by the food industry in a wide array of products from chocolate, crisps, ready meals to sweets, palm oil is both a controversial ingredient and, for many, an unknown one.

Used for centuries as a cooking oil in West Africa, palm oil has properties that make it a highly desirable and affordable component in food production. It is also used widely in animal feed, and in ever-larger quantities in South-East Asia as a cooking oil.

The target of several high-profile campaigns highlighting environmental damage caused by the rapid unchecked spread of palm plantations, it currently does not have to be labelled as palm oil, only 'vegetable fat' or 'vegetable oil'.

Dan Saladino goes on a journey to find out why the global use of this oil is growing so fast, and speaks to some of the key players in the palm oil world.

Dan follows the trail of this infamous and ubiquitous substance, ending at the Liverpool refinery of New Britain Palm Oil. Despite all the difficulties that the industry faces he asks if palm oil - actually an incredibly efficient, high-yielding crop - is the future for food?