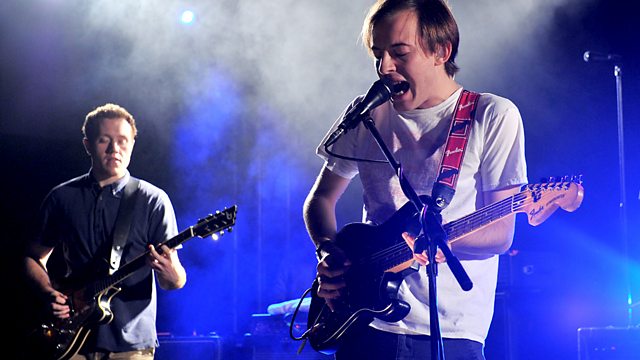 Marc Riley has a triple bill of treats with Jimi Goodwin in session plus live performances from John Cooper Clarke and Bombay Bicycle Club.

Marc Riley has a triple bill of treats tonight, with Jimi Goodwin in session and live performance from John Cooper Clarke and Bombay Bicycle Club.

Jimi Goodwin, him of Doves fame, pulls up a perch and does a live session tonight. Having been together for close to twenty-four years the Doves announced that they were going to take a break last year. Not being one to just sit around, Jimi has been busy working on some solo stuff with one Mr Garvey, as well as what he is here for tonight, new project Jimi Godwin & The Bird Effect Ensemble.

The Ghosts Of Gone Birds is an exhibition of originally commissioned artworks, literature and music from Sir Peter Blake, Jamie Hewlett, Jimi, and many more, all working to raise awareness for our feathered friends. Jimi's piece, The Bird Effect, has been written for documentary of the same name by Ceri Levy. Tonight is going to be a change from the norm for Mr Goodwin, and we're glad that he's here to play live for us and you.

And, as 6 Music's Showcase delivers an evening of live performance in Salford, tonight's Marc Riley Show has live tracks from John Cooper Clarke and Bombay Bicycle Club. 6 Music's Mark Radcliffe and Stuart Maconie host the showcase from the BBC Philharmonic Studio in Salford.