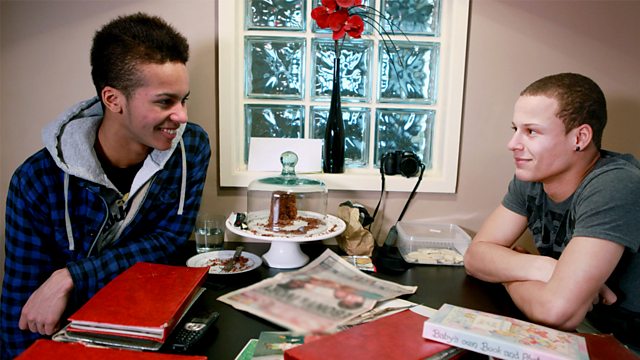 Documentary following twins of different skin colours, throwing new light on how siblings who are similar in so many other ways lead different lives because of their skin.

There's only a slim chance that black and white parents will have twins of different skin colour, but as one in ten children born in the UK is now mixed race, this genetic quirk is going to become increasingly common. Twincredibles follows five sets of twins, from toddlers through to adults, to create a surprising and compelling story about the journey of mixed-race Britain.

The stories of all these twins throw a new and fascinating light on how brothers and sisters who are similar in so many other ways lead different lives because of their skin colour. The experiences don't always match the stereotype. For teenage boys James and Daniel, growing up in Eltham South East London, it was the whiter-looking twin Daniel who suffered racial abuse, whilst darker twin James was left alone.

Travelling through the experiences of each set of twins, the film unpeels the impact this accident of their birth has on how they see themselves and how the outside world views them. Living in diverse locations across England to Scotland, the twins tell their stories in their own words, to paint an honest and sometimes hard-hitting picture of race in modern Britain.