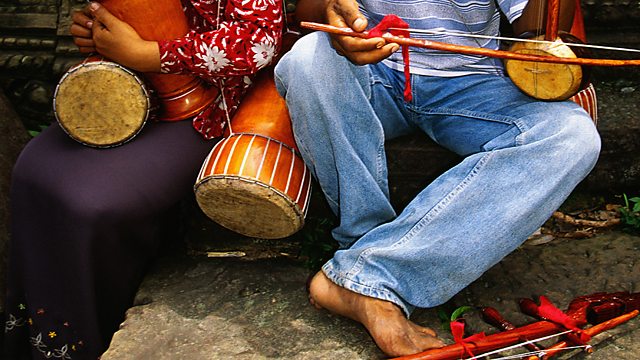 Norway's national instrument, the hardanger fiddle, drew today's migrant to move to the Setesdal Valley, a region steeped in tradition.

Daniel Sanden-Warg grew up in Sweden listening to rock giants. As a teenager, he appeared on Swedish television playing the guitar a la Jimi Hendrix (including behind his back and with his teeth). Then a new boy arrived at his school and through him, Daniel discovered folk music, specifically the hardanger fiddle tradition of Norway's Setesdal Valley. Of hearing this music for the first time, he says "it was life-changing for me. I was sure at once that this is what I want to do. This is the music I want to play. I have to get good at it, and if I'm going to be poor, I don't care, that's going to be my life, that's it."

Daniel's dream was to study with the man who'd played on the first recording he heard - Hallvard Bjorgum. After practising for hours each day for months, he sent Hallvard a demo tape and waited anxiously for a response. On Christmas Eve, Hallvard called him. He told Daniel that his playing reminded him of his father and that he could come and study with him any time.

So Daniel moved to the extraordinary Setesdal valley in the south of Norway - an area famed for centuries for its fiddlers and where folklife is cherished. He became fully absorbed into the culture. He played side by side with Hallvard, built his own traditional log cabin, and learned the ancient art of silver-smithing - a craft typically practised by Setesdal fiddlers because it is gentler on their fingers than, for example, logging. Daniel, whom Hallvard describes as a genius, is now one of the most sought-after hardanger fiddle players in the world.