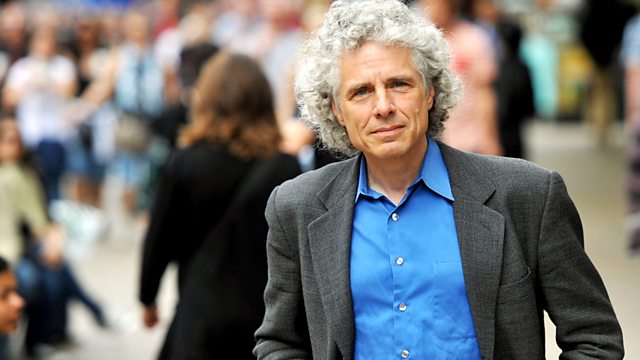 Jim al-Khalili gets inside the mind of cognitive psychologist and science writer Steven Pinker, also known as 'science's agent provocateur'.

Pinker studies how the mind works. Presenter Jim al-Khalili wants to find out how his mind works. Pinker replies: "as a psychologist you look at your own life as data and say geez that's what I'm like".

From verbs to violence, he's author of several books that many say are mind-changing.

He's now something of a science superstar, but his early experiments with electrodes on rats didn't quite go according to plan: "I realised then that that kind of science required a level of meticulousness that I just didn't have". So instead of studying neuroscience, he became a cognitive psychologist.

Now perhaps better known for his writing than his science, he shot to fame with his book The Language Instinct, based on his early studies of how children tackle irregular verbs, for example saying "holded" not held, and "digged" instead of dug. These cute sounding mistakes are proof that three year olds are grammatical geniuses, he says. And he met his wife Rebecca Goldstein over an irregular verb.

Later, Pinker set the cat among the social science pigeons by stressing the importance of nature rather than nurture: an assertion that led to some bitter arguments with, among others, the psychologist Oliver James.

He readily admits that genes aren't everything: he's decided not to have children and says "if my genes don't like it, they can go jump in the lake". But he says, "there's a phobia of genetics that it's time to get over". Our failure to even think about genetic influences has given us a false impression of the amount of influence parents have over their children: it's skewed the science.

Parents like to think that they mould and shape their children in certain ways but Pinker argues, as long as children are not abused, parenting makes little difference to how they turn out at 18.

His most recent book 'The Better Angels of Our Nature' is about the decline in global violence from 8500 BC. Despite two World Wars, Vietnam, Kosovo, Iraq, Darfur and many others, Pinker asserts that we are living in the most peaceful times ever and wants to know why our better angels triumph over our inner demons. Is he now showing the better angel of his Nature?

Each week on The Life Scientific, Jim al-Khalili invites a leading scientist to tell us about their life and work: he wants to get under their skin and into their minds. And he'll ask what their discoveries might do for us. He talks to Nobel laureates as well as the next generation of beautiful minds and finds out what inspired them to do science in the first place and what motivates them to keep going. Fellow scientists will comment on their work, putting it in context and offering alternative perspectives.

Themes and ideas from the interviews will be explored on The Life Scientific website, which will aggregate some of the best Radio 4 Science archive around the topics discussed in the programmes.