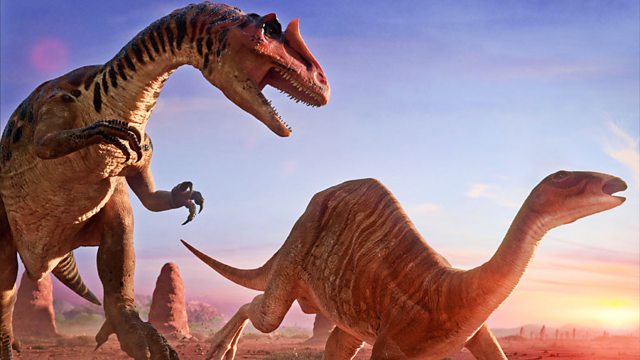 This episode of the documentary series focuses on the Jurassic period, a time when the first giant killers stalked the Earth and lurked in the seas.

This episode focuses on the Jurassic period, a time when the first giant killers stalked the Earth and lurked in the seas - and the slightest advantage meant the difference between life and death.

In North America, the iconic allosaurus, an ambush hunter with a lethal bite, dominated. Not even the heavily armoured stegosaurus was safe from this killer, and incredible evidence reveals a glimpse of a vicious battle between these two giants.

Life in Jurassic oceans was no easier - in 2008, a fossil was dug out of a frozen island high in the Arctic. It was a colossal marine reptile, twice as big as most ocean predators at 15 metres long and weighing about 45 tonnes. This was Predator X. Its skull alone was nearly twice the size of a Tyrannosaurus rex's, and its bite force unmatched by anything in the Jurassic seas.

The balance of power between predator and prey is a fine one, as prey continually evolve different ways to avoid predators. But for the most successful and enduring predators, the battle to survive has always been tipped in their favour.

See all episodes from Planet Dinosaur

See all clips from Fight for Life (5)