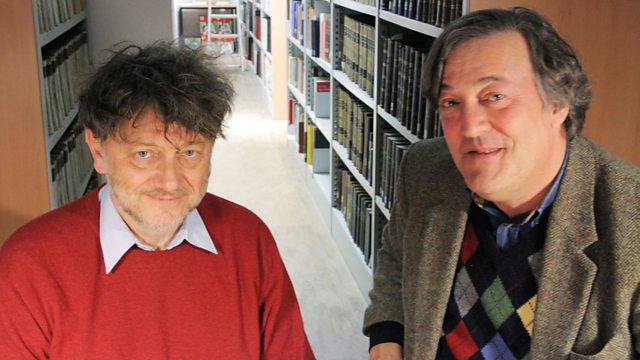 Documentary series focusing on language. Stephen Fry seeks to uncover the origins of language and how and why we are the only species on the planet to have this gift.

In this five-part series, Stephen Fry explores language in all its amazing complexity, variety and ingenuity. In his own distinctive way, he comes to understand how we learn it, write it, sometimes lose it, why it defines us to the very core of our being and can make us laugh, cry, tear our hair out and simply inspire us.

In this first episode, Stephen seeks to uncover the origins of human language and how and why we are the only species on the planet to have this gift.

From attempts to teach chimps to speak to the so-called singing mice who have been given the human 'language gene', Stephen uncovers to what extent our brain is uniquely hard-wired for language. Watching how a child acquires language, Stephen hears from psycholinguist Steven Pinker how grammar is an innate quality, yet still has to be nurtured. Case studies of feral children, like Victor of Aveyron, illustrate how difficult it is to be certain which is more important. And at the National Theatre of the Deaf in Connecticut, Stephen learns why sign language is a true language.

Taking part in a Klingon version of Hamlet prompts Stephen to ask the question why we have created the 6,000 plus languages which exist on the planet and with philologist Wolfgang Klein, he understands Grimm's law, which shows how over 2,000 Indo-European languages have all come from one source.

See all clips from Babel (2)