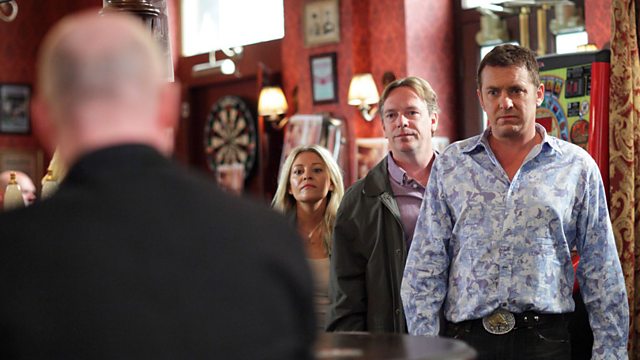 A panicked Ben tries to contain the truth about his relationship with Duncan. Mandy is alarmed when Alfie reveals that Ian is on his way home. Tamwar and Syed reel from Masood.

Patrick demands £100 for a new window for the B& B - or he’ll tell Phil. Panicked, Ben tries first the café, then the Arches but is caught stealing from the till by Phil.

In the Minute Mart, Ben tries to intimidate Patrick into keeping quiet. Patrick’s adamant it doesn’t matter to him who Ben kisses. Ben admits he’s afraid of Phil’s reaction and wants Phil to be proud of him.

Patrick tells Ben about his own sons and advises him to tell his dad about Duncan. When Ben wonders how Patrick would have reacted if his sons were different, Patrick’s quick to insist – his sons weren’t gay.

Hurt, Ben thinks Patrick is as bad as Phil and insinuates he abandoned his son. As Patrick grabs hold of Ben in rage, Phil hammers on the locked door. Patrick refuses to explain or apologise to Ben, Phil warns him he’ll regret it.

Manoeuvred by Vanessa, Anthony and Tyler reconcile as they refit the B&B window together. Tyler’s amused that Anthony’s ordered the wrong size window pane.

Michael’s overcome when Eddie asks him to move in. Liam won’t speak to Eddie and tells him Carol’s even more sad than usual. Eddie’s pleasantly surprised to discover Vanessa’s helped Anthony and Tyler make up.

Learning of the divorce, Yusef suggests Zainab take something to calm her. Zainab refuses to go back on the pills. Tamwar insists Masood’s made everything worse and urges him to speak to Zainab.