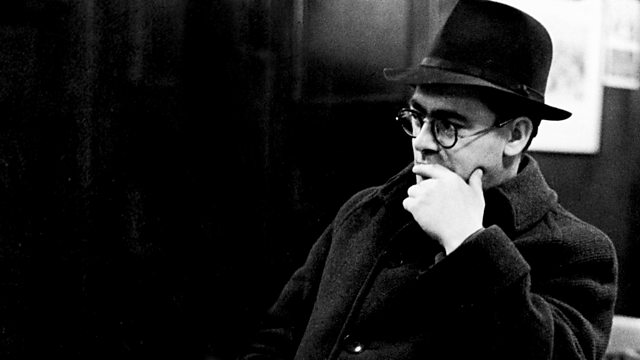 The Man with Many Names

4 Extra Debut. Peter Day explores the haunts and the unquenchable humour of the enigmatic Irish novelist and humourist, Flann O'Brien. From October 2011.

Brian O'Nolan he was born - or perhaps Brian O Nuallain if you want to be strictly accurate. He spoke Irish at home and learned English second (and German too); yet arguably his greatest work - the Third Policeman - is a tour de force of English linguistical pyrotechnics and Lewis Carroll-like absurdist exoticism - people turning into bicycles is par for the course.

He published his books as Flann O'Brien; he penned a must-read daily column in the Irish Times as Myles na gCopaleen and at various times in his short life wrote as George Knowall, John James Doe, Matt Duffy, Count O'Blather, Brother Barnabas and Sean O'Longain... But as Brian O'Nolan he was also a senior civil servant and adviser to government ministers, and his habit of retiring early to The Scotch House to consume many, many pints of plain, while tolerated for years ended up finishing his career. In fact 'the little weakness' as one contributor calls it finally cost O'Nolan his life.

To mark the centenary of O'Nolan's birth, Peter Day - a longtime Flann fan - travels to Dublin in search of the reality behind the multiple personas, and meets those who drank with him, supped with him at the family dinner table and have made careers out of studying him...