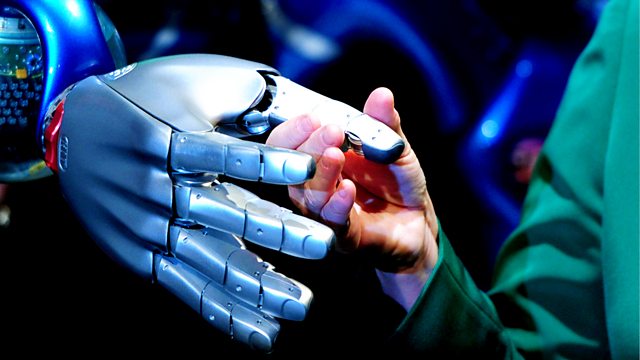 Robots that Care
Episode 2 of 2

With the huge advances in robotics, scientists are focusing on the interaction between humans and robots. Jon Stewart explores how robots are used as carers and motivators.

In the second of a two-part series, Robots that Care, Jon Stewart visits research institutes in the USA and UK to explore the brave new ideas about how robots may be able to help humans on a one-to-one basis. He talks to key roboticists, their collaborators and volunteers about the practicalities and ethics of using robots to help people.

A number of studies have been done and more are underway in the use of robots for people wanting to lose weight and for children who are autistic. Robotocists are also conducting long-term projects with people who have suffered strokes. The robots are designed as personal instructors to help motivate and restore motor function. But they must be emotionally smart and coax rather than order about like a sergeant major. The roboticists are also examining how they might customise their robots to fit the personalities of the people whom they will serve.

We have put robots on the moon but it seems that it is more difficult to put them in homes. A visit to a robot house in the UK shows that there are many pitfalls still to overcome before robots will be useful in our living rooms and kitchens.

Finally, Robots that Care asks: what are the dangers of making the robots too human? Are there problems of dependency? What ethical and moral questions arise when robots socialise human beings?

See all episodes from Robots that Care