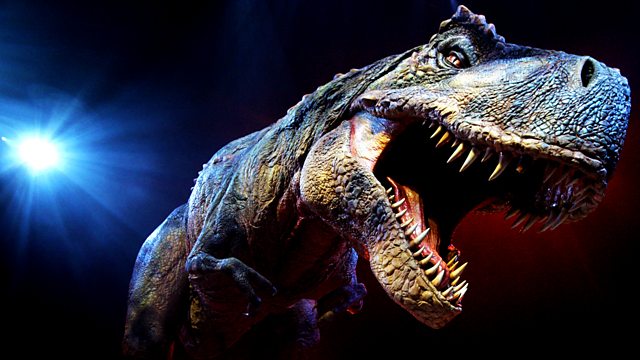 Charting the enduring appeal of dinosaur and monster films, from their early beginnings in a fledgling industry, to the spectacular computer wizardry of Jurassic Park and beyond.

From the beginnings of film-making to the triumph of Jurassic Park - the dinosaur has always been a movie star. Over 60 minutes, BBC4's Rex Appeal takes a bite out of the Cretaceous cinema and reveals the truth about T-Rex.

It's a story that stretches from the charming cartoon apatosaurus Gertie (1914), to the vicious and cunning velociraptors of Spielbrerg's imagination.

But it's not all teeth and trashing city centres - as our critics explain, dinosaur movies are always about more than just dinosaurs. The 'nature finds a way' DNA argument in Jurassic Park directly mirrored the arguements about GM crops in the early 90s. Godzilla - the radioactive-breathed dinosaur emerged from the seas of Japan just nine years after the nuclear attack on Hiroshima. King Kong and his dinosaur pals on Skull Island have sparked a million film school theories.

Of course, not all dino dramas are so high minded - in the Hammer film One Million Years BC, the audience were just as fascinated with Racquel Welsh's fur tops as they were with the Triceratops. Despite Hammer's claim that 'This is the way it was', the science was a little dubious- the last dinosaur died 64 million years before the first modern human appeared.

Whatever cultural anxieties dinosaurs represent, they've always been a cinematic spectacle that has thrilled audiences on a instinctual level - with each new breakthrough in special effects giving us ever more real Rex's.

Willis O'Brien gave us the legendary Kong v Rex fight that taught us to love Kong, Ray Harryhausen invented 'dinomation' and put dinosaurs and cowboys together in The Valley of Gwangi. And since the 90s - CGI has banished the man in the dino suit, and made prehistoric protagonists are more real than ever.