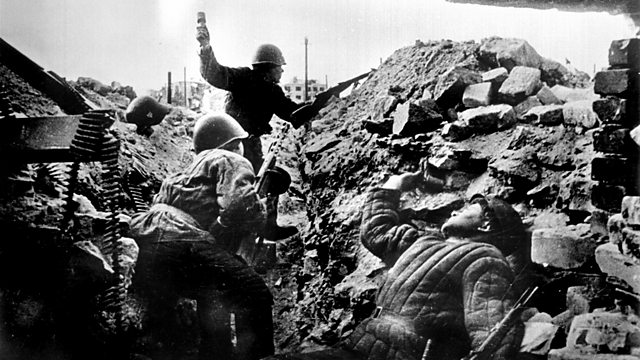 Vasily Grossman from the Frontline
Episode 1 of 3

Elliot Levey reads Vasily Grossman's front line despatches from the battle of Stalingrad. In the war of the rats, snipers like Anatoly Chekhov reigned.

Elliot Levey reads Vasily Grossman's front line despatches from the battle of Stalingrad 1:Through Chekhov's Eyes. In the war of the rats snipers like Anatoly Chekhov reigned. Translated by Jim Riordan.

Vasily Grossman, author of Life and Fate, was transformed by his experiences as a front line war correspondent. Following the shock invasion of the Soviet Union in June 1941, Grossman volunteered for front line duty. Declared unfit for active service he was assigned to Red Star newspaper as a special correspondent. His editor David Ortenberg noted that Grossman, despite no combat experience, knew about 'people's souls' .

1: Through Chekhov's Eyes. Red Star 20th November 1942.
'I wanted to become the sort of man who destroys the enemy with his own hands'. The cult of the sniper emerged spontaneously during the Stalingrad conflict. The 'Stalingrad Academy of street fighting' became a new kind of war where every floor, every building, every block became its own front line. Here a sniper could extract a terrible and personal vengeance upon the German invaders who had forced the Soviets to the very banks of the river Volga. Encouraged by their commanders, lionized by journalists like Grossman, the sniper became a heroic symbol of steely determination. Here Grossman delivers a portrait both intimate and heroic of a young man transformed by war amidst the ruined city.

Chekhov, along with Vasili Zaitsev, was already a star with 35 kills in the heaviest fighting of October. According to Grossman's editor, General Ortenberg, the writer spent many hours with Chekov in his firing post by a wrecked wall. Chekhov would later be credited with 256 'sticks' or enemy soldiers.

See all episodes from Vasily Grossman from the Frontline