BBC Four
Elegance and Decadence: The Age of the Regency
Main content 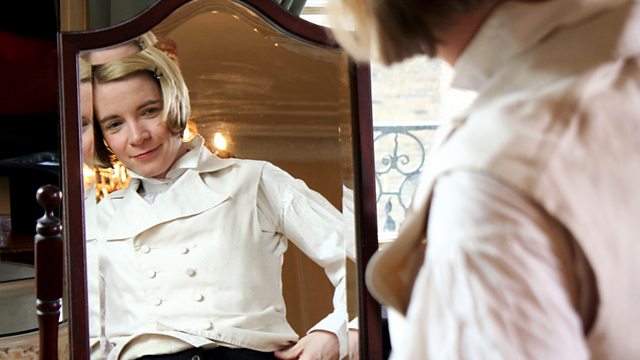 Warts and All - Portrait of a Prince

Elegance and Decadence: The Age of the Regency
Episode 1 of 3

Historian Dr Lucy Worsley looks at how the Prince Regent was obsessed with outdoing Napoleon not on the battlefield, but in opulence, bling and monumental architecture.

Colourful series marking the 200th anniversary of one of the most explosive and creative decades in British history. It presents a vivid portrait of an age of elegance presided over by a prince of decadence - the infamous Prince Regent himself, a man with legendary appetites for women, food and self-indulgence. Yet this was the same man who would rebuild London, carving out the great thoroughfare of Regent Street and help establish the Regency look as the epitome of British style through his extravagant patronage of art and design.

In this first episode, historian Dr Lucy Worsley chronicles the Regency's early years, which culminated in victory over Napoleon in 1815, and explores the complicated character of the Prince Regent, a man with legendary appetites for women, food, art and self-indulgence.

For Lucy, the Regency was an age of contradictions and extremes that were embodied in the person of the Prince Regent himself. She uncovers Prince George's modest childhood; bright and talented, the young George was beaten with a whip by his tutors and it was small wonder that he would later rebel, eventually embracing a scandal-ridden lifestyle that included illegal marriages and discarded mistresses.

So how did this overweight popinjay preside over an age in which art and culture mattered? A tour of his treasures in the Royal Collection shows Lucy that George was a genuine connoisseur, buying up Rembrandts and French furnishings while his excesses were at the same time inspiring satirical caricatures that mocked him as the 'Prince of Whales'. And she investigates George's collaboration with portrait painter Sir Thomas Lawrence, who left the definitive images of Regency society and became George's flatterer-in-chief; Regency wags laughed at how his paintings magically transformed an overweight bald fifty-something into a 'well-fleshed Adonis'.

Meanwhile, the long war with France was having a huge impact on the British psyche; travel and trade with Europe were impossibly restricted. Lucy follows in the footsteps of painter JMW Turner who, unable to travel to the continent, toured the south coast in 1811 and captured startling images of a country at war.

George liked to think of himself as a man of fashion, and Lucy takes us through surviving accounts from his tailors that reveal his shopaholic ways. These were the years in which the Prince's sometime friend Beau Brummell, the famous dandy, ruled fashionable London like a dictator, and Lucy samples a bit of butch Regency style by trying on some of the fashions he popularised, as well as joining Brummell biographer Ian Kelly on a tour of London's fashionable Regency haunts. She also discovers Brummell's spectacular fall from favour, after loudly referring to the Regent as someone's 'fat friend'.

Lucy visits the battlefield of Waterloo and discovers that the site became a prototype of battlefield tourism - Turner, Byron and many others all visited in the years after the battle and Lucy handles some grisly memorabilia purchased by Lord Byron.

The episode concludes with the most spectacular royal art commission of them all - Lawrence's series of paintings in the Waterloo Chamber at Windsor Castle, paid for by George to memorialise his victory over Napoleon. Never mind that George wasn't at any of the battles - this was an age in which appearance and reality fused together to create monumental art.

See all episodes from Elegance and Decadence: The Age of the Regency