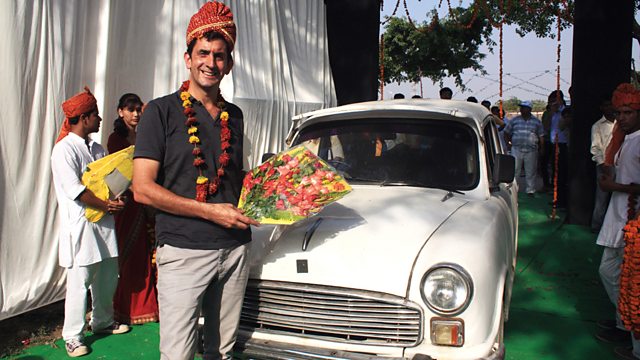 India on Four Wheels
Episode 2 of 2

Justin Rowlatt and Anita Rani embark on an epic road trip around India. Anita has reached Mumbai, while Justin meets rural farmers who are getting their first taste of motoring.

Justin Rowlatt and Anita Rani embark on an epic road trip around India to discover how a booming car industry is helping to fuel the country's massive economic growth.

Nearly two weeks into her journey in an Indian-made Mahindra 4x4, Anita has reached Mumbai, India's financial hub, and home to billionaires and Bollywood stars, as well as one of the world's biggest slums. As she continues on her discovery of modern India, Anita encounters some of the fastest and most dangerous roads in the country, Bangalore's night-life, and a rally champ who is on a personal mission to make India's drivers better and safer.

Meanwhile, Justin is nurturing his rusty Hindustan Ambassador along some far more bumpy roads as he meets rural farmers who are getting their first taste of motoring, sees the potential effects of fossil fuel use on one of the world's most precious and delicate ecosystems, and meets an ancient tribe, locked into a battle with industry over an aluminium-rich, sacred mountain.

The road-weary pair aim to meet up in the mega-port of Chennai to complete their journeys - if the cars make it that far.

See all episodes from India on Four Wheels