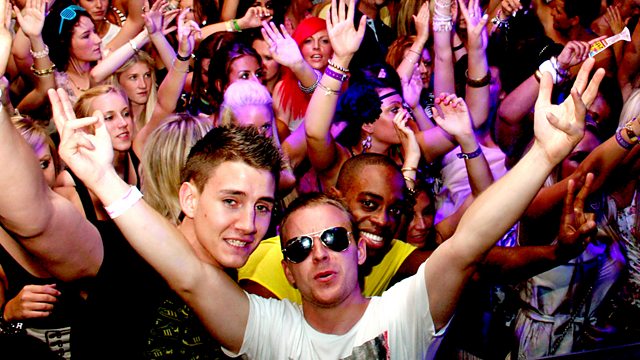 Kate O'Brien explores Ibiza's influence over British youth culture and nightlife, and the rise of the Superstar DJ. From 2011.

The island of Ibiza has subtly influenced British youth culture and the nation's night-time economy for well over 20 years.

The Balearic attitude to nightlife and entertainment was adopted in Britain during the late 1980s and soon many young Brits were united by their devotion to house music, recreational drug taking and warehouse parties or raves.

Dr Kate O'Brien meets those at the heart of these changes. Internationally celebrated DJ Paul Oakenfield shares his first experience in Ibiza and how he tried to recreate the island's bohemian, hedonistic party scene. DJ Pete Tong explains how he pushed Radio 1 into being part of this unrelenting youth movement.

A former Chief Constable recalls struggling to manage 40,000 party-goers at an all-night rave. Plus experts on alcohol and drug consumption tell how society and government reacted to the 'normalisation' of recreational drug taking, with young people's determined move away from the limitations of licensed premises.

The history of British dance culture and clubbing is complex and fascinating, and Kate explores its impact.

A Made in Manchester production for BBC Radio 4 first broadcast in August 2011.