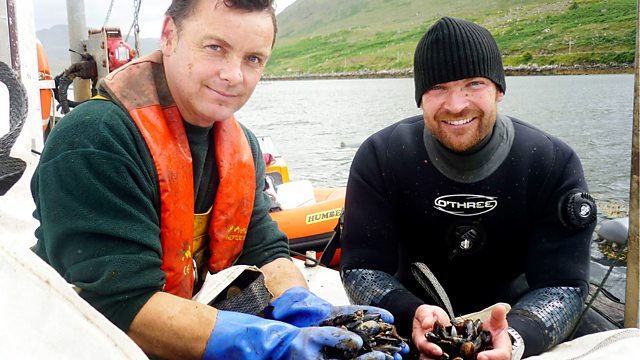 Documentary series. Monty Halls spends a summer in the west of Ireland, observing the animals that migrate through the waters off Connemara - including dolphins, seals and otters.

The west of Ireland is one of the most spectacularly beautiful coastlines in the world, and for one glorious summer it's home from home for Monty Halls and his overenthusiastic dog Reuben. Some of the biggest and most mysterious animals on the planet migrate through the waters off Connemara, but nobody knows how many whales, dolphins, porpoises, basking sharks and even blue sharks are out there. It's Monty's job to find out before the winter storms bring research to an end.

Monty is back to his roots as a marine biologist, living on an island near the fishing village of Roundstone and trying to feed himself from the sea and what he can grow in his cottage garden. The sea teems with life and Monty is soon enjoying dolphin, seal and otter encounters plus a spectacular dive with huge conger eels. But there's a darker side to the job. More than a hundred whales and dolphins strand on Irish shores every year, and Monty is called to reports of a young minke whale that's been washed up on rocks. It's too late to save the whale, but it's a valuable opportunity for Monty to learn as much as he can about how it lived and died.