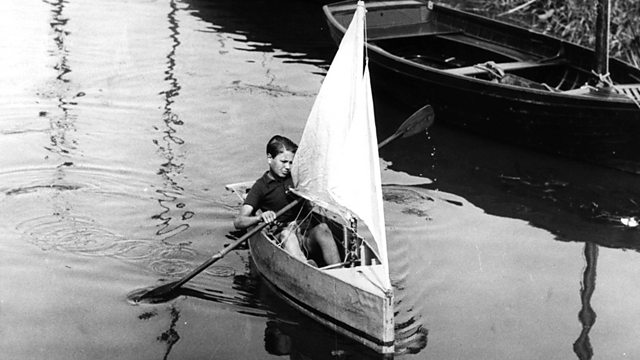 John McCarthy explores the life of Swallows and Amazons author, Arthur Ransome, through the boats he owned. From 2011.

Arthur Ransome is best known for writing the 'Swallows and Amazons' series of children's books. These tell of school-holiday adventures of children, mostly in the Lake District and the Norfolk Broads. Nearly all of Ransome's books involve sailing, a reflection of his own passion for boats, which he spent his lifetime owning and enjoying.

Ransome owned many boats during his lifetime, and in this programme John McCarthy, a keen sailor himself, goes to see many of them, gradually piecing together a picture of the writer, through the boats he owned.
Nancy Blackett is featured in 'We Didn't Mean to Go to Sea', as the Goblin, the boat in which four children sail across the North Sea to Holland. Ransome sailed the course himself in Nancy, and worked on the book aboard her, while living near Pin Mill on the River Orwell in Suffolk.

Recently rescued and restored, Nancy Blackett is now preserved and maintained and sailed regularly by its owners. Nancy Blackett was Arthur Ransome's favourite amongst the cruising yachts he owned during his lifetime. He named her after his favourite character, the adventurous, irrepressible leader of the Amazon Pirates who first appears in 'Swallows and Amazons'.

Ransome's dinghy Coch-y-Bonddhu was his favourite for sailing around the Walton Backwaters, just a few miles fom his home on the Orwell. He used to anchor up to work and it was here in Coch-y-Bonddhu that he wrote 'Secret Water'. The boat appears as 'Scarab' in the books. John also visits Ragged Robin, formerly named Lottie Blossom, and Peter Duck.

As John McCarthy travels around the UK visiting and sailing in Ransome's boats, he also encounters Mavis, which was the model for the Amazon and Esperance, a steam launch and a likely model for 'Captain Flint's Houseboat'.