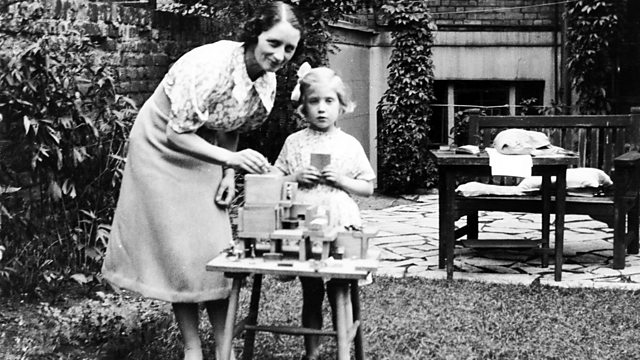 Baroness Shirley Williams returns to her childhood homes in London's Chelsea and the New Forest. Born into privilege in 1930, she traces the roots of a life in politics.

Shirley Williams, now Baroness Williams, returns to her childhood homes in London's Chelsea and the New Forest. Her mother was the writer, Vera Brittain, whose most famous novel - Testament of Youth - was a best-seller when Shirley was a child in the 1930s. Her father, George Catlin, was an academic and and an instinctive feminist whose own mother had been an early suffragette, ostracised by Victorian society. He was a frustrated politician who stood for parliament a number of times but was never elected. But these were not the only nurturing adults in her young life. Also hugely significant was her mother's best friend, Winifred Holtby, and the housekeeper and her husband, Amy & Charlie Burnett - a bright, under-educated working class couple whom Shirley adored.

The conversations in her childhood home centred on world events - the Spanish civil war and the rise of Hitler. Vera Brittain was a pacifist and, as such, found herself and her husband on the Nazis' blacklist. Had the Germans invaded in 1940, Shirley's parents would likely have been eliminated. Fearful of this, soon after war broke out and with the battle of the Atlantic raging, they put Shirley and her brother on a ship and evacuated them to the USA.

The programme focuses on the relationships she forged with the adults in her early life and what she learned from them all. She credits her father with giving her the confidence to pursue a life in politics, Amy with imbuing in her a practical understanding of the constraints of a class-bound society, her mother with a vision of nobility and Winifred? Winifred was simply fun.

Wendy Robbins accompanies Shirley Williams as she revisits the homes and haunts of her childhood.
Producer : Rosamund Jones.