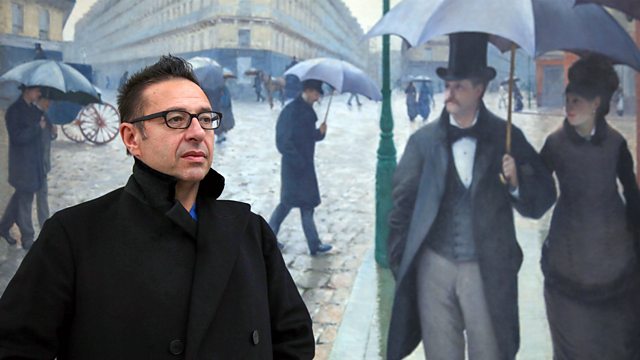 The Impressionists: Painting and Revolution
Episode 1 of 4

Waldemar Januszczak explores the revolutionary achievements of the Impressionists. He delves into the back stories of Pissarro, Monet, Renoir and Bazille.

Art writer Waldemar Januszczak explores the revolutionary achievements of the Impressionists. In the first episode, Waldemar delves into the back stories of four of the most influential Impressionists - Pissarro, Monet, Renoir and Bazille - who together laid the foundations of the artistic movement. He finds out what social and cultural influences drove them to their style of painting, how they were united and how ultimately they challenged and changed art forever.

Waldemar journeys from the shores of the West Indies, to the progressive city of Paris to the suburbs of South London, where these four artists drew inspiration from the cities and towns in which they lived. Whether it be the infamous spot on the river Seine - La Grenouillere - where Monet and Renoir beautifully captured animated people, iridescent light and undulating water or the minimalist, non-sensationalised illustrations of Pissarro's coarse countryside paintings, Waldemar discovers how the Impressionists broke conventions by depicting every day encounters within the unpredictable and ever changing sights around them.

See all episodes from The Impressionists: Painting and Revolution