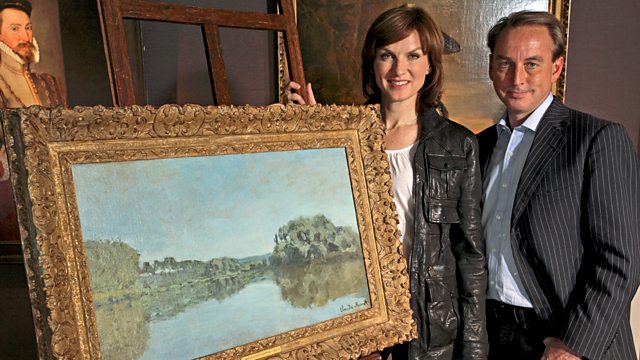 Fake or Fortune? Series 1
Episode 4 of 4

Fiona Bruce and Philip Mould investigate mysteries behind paintings. A picture up for auction is suspected of having been stolen. Could it really be a Rembrandt?

In this closing episode, suspicions are aroused when Philip and his researcher Bendor spot a rogue picture for sale in a South African auction house. It exudes all the classic scent of being a 'sleeper', an important picture that has been miscatalogued and offered for a very low price.

But there is a darker side revealed when investigations uncover that this is a wanted painting, having been stolen by the Nazis in World War II. Records show it was considered a German national treasure, once thought to have been painted by Rembrandt. A Jewish family have been trying to track it and other works stolen from their gallery ever since.

With minutes to go, Philip and Fiona manage to stop the sale and release the picture for investigation. Having picked it up from Cape Town, Fiona delivers it to Philip and an in-depth examination utilising the latest infrared and forensic testing begins. Can it really be by Rembrandt and will it be possible to see it returned to its rightful owners?

In an effort to solve who painted it, Philip travels to Amsterdam to meet a man with the power of a demigod; the chair of the Rembrandt Research Project on whose word hangs the verdict that can make the value differ by many millions of pounds.

Fiona meanwhile tries to unpick the thorny question of ownership before returning the picture to South Africa, when the owner of the disputed painting finally emerges from the shadows to tell his story.

A closer look at Rembrandt

Rembrandt was one of the most influential European painters of his time. He painted hundreds of portraits and historical paintings when many of his peers were painting scenes of everyday life.

Find out more about Rembrandt on BBC Your Paintings