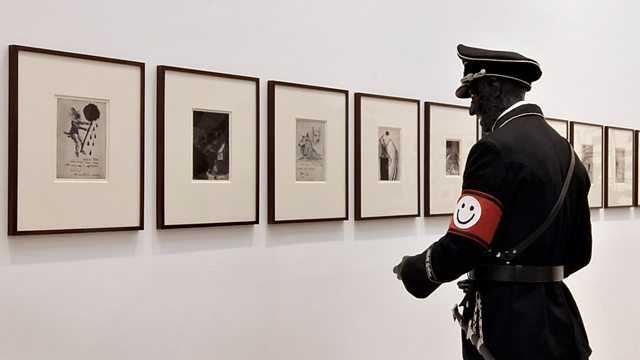 Jake or Dinos Chapman - A Show of Work Done Separately

With Mark Lawson, who reports on new works by Jake and Dinos Chapman, and reviews two TV programmes and a new novel which all focus on the current pressures on teachers and pupils.

Jake and Dinos Chapman enjoy unsettling viewers of their work. Their latest exhibition, Jake or Dinos Chapman, features art they have created individually, with no revelation of who made which work. Nazi and religious imagery are prominent, along with familiar themes from their earlier work. Critic Matthew Collings reviews.

Mr Benn creator David McKee celebrates the 40th anniversary of his bowler-hatted children's character, whose identity changed - into cowboy, red knight or astronaut - as he exited the dressing room of a costume shop into a different world of adventure in every episode.

Actress Miranda Raison reflects on her career so far, which includes the title role in Howard Brenton's play Anne Boleyn, and the part of an MI5 operative in the long-running TV thriller Spooks.

Two new TV programmes and a novel all focus on the pressures facing teachers and children, and the bad behaviour that can result - and not only from the pupils. Classroom Secrets is a documentary filmed in a Leicestershire primary school, Double Lesson is a monologue delivered by a history teacher (played by Phil Davis) who attacked a pupil, and Francis Gilbert's novel The Last Day of Term is set in an inner-city school. Free school pioneer Toby Young and Judy Friedberg of The Guardian deliver their verdicts.

The biggest ever symphony; smoking on stage; Ben Mezrich