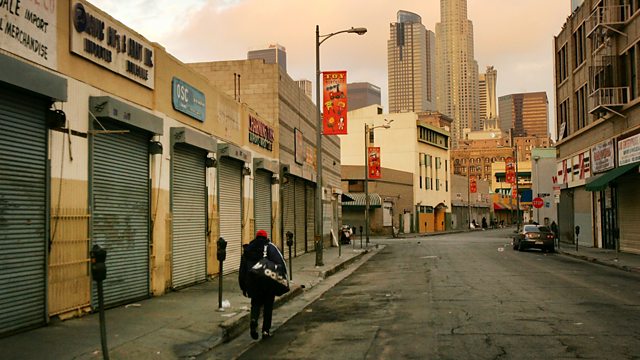 Down and Out in the City of Angels

Peter Bowes investigates the homeless capital of the USA: Los Angeles. Why are so many of those in need war veterans? From 2011.

Rob Campbell used to be in charge of a top secret computer system for the US military; he now camps down for the night in a doorway, his hair matted, his fingernails grimy, alert for trouble from cops. Corporal Hernadez left the US Infantry in 2006, and considers himself pretty sorted out; but he still gets jumpy hearing fireworks on the 4th of July.

It's Veteran's Day in California. It's a day to celebrate returning heroes, and in true Hollywood style, Arnold Schwarzenegger is giving the address. But Los Angeles, city of sunshine and movie stars, is also the homeless capital of America - estimates vary between 50 and 75 thousand - and returning US veterans from Korea, Vietnam, Iraq and Afghanistan, make up a fifth of that number.

Veterans are 50% more likely to become homeless than any other demographic in the US, and to try and end the crisis, one year ago, President Obama gave a speech in which he not only promised to fight the problem, but end homelessness completely amongst veterans by 2015.

Can Obama succeed in his plan to avert a human crisis as a flood of newly discharged soldiers, carrying with them the trauma of war, re-enter an economy in recession?

Peter Bowes heads out to skid row - more than just a row, actually 50 square blocks of down town LA - to find out what the challenge will be, meeting the down and outs on skid row, a city within a city, to find out where things went wrong for America's heroes, and whether Obama has a hope of turning round America's hidden shame.