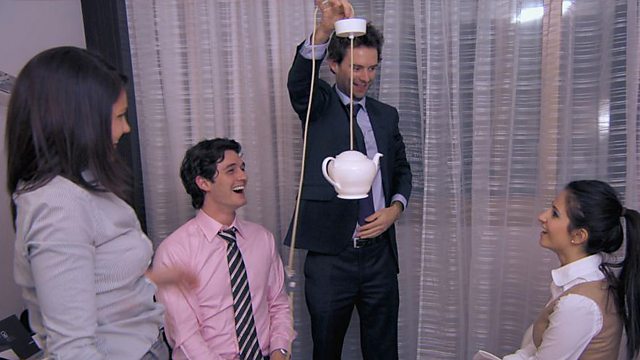 The Apprentice Series 7
Episode 8 of 15

Business-based reality show. The teams are summoned to St Pancras International, where they are informed their next task is to introduce British products to the French market.

The venue for the candidates' latest briefing is St Pancras International. With the next Eurostar about to leave, there is just time for Lord Sugar to brief and re-balance the personnel, and then it's off to Paris for half of each team. The others must stay back and choose some new British designs to sell to the French. It is a classic export task, with Lord Sugar on the lookout for proven ability to do business abroad.

While the candidates in Paris arrange sales appointments for tomorrow, the London-based groups are treated to quirky products by entrepeneurs wanting a slice of the French market. There's everything from toys to top-end bikes. It is immediately clear that some of Lord Sugar's budding business partners know very little about the French, and even less about what they will buy. To help, he sets them up with a major French retailer, but the teams must fix all the other pitches. Street-based research gets lost in translation. Candidates struggle to describe in stuttering franglais items they haven't seen, while one candidate proves fluent in French, yet hopeless at diplomacy.

Back in the boardroom the teams are subjected to more hard-faced stares, this time from Lord Sugar on hearing that someone decided to employ a playground game to decide who would pitch. And one team discovers it picked a winning product with some blockbusting sales figures. But the losers face an inquisition and then the verbal guillotine: "You're fired!".

See all clips from Paris (6)