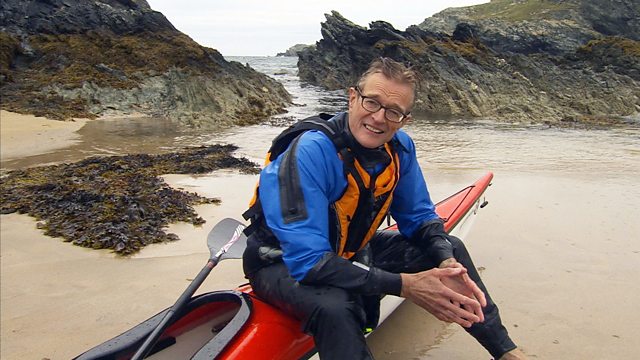 The team journey around the stunning shores of Devon and Cornwall. Nick Crane is on board one of the last remaining Brixham trawlers, a beautiful sailing boat.

The team's journey continues around the stunning shores of Devon and Cornwall.

Nick Crane is on a fishing expedition on board one of the last remaining Brixham trawlers - the beautiful sailing boats built in Devon over a century ago that gave birth to fishing on an industrial scale. On his trip back in time aboard the Brixham boat, Nick discovers why the trawlermen of today have to work 17 times harder to land the same catch as their counterparts did around 100 years ago. He also explores how Henry VIII, fearing attack after his famous divorce, built a string of cleverly positioned forts all along the south coast to keep countries loyal to the Pope at bay.

Testing his sea legs to the limit, Nick then embarks on one of the greatest voyages in British waters - an exhilarating ferry ride taking on the full force of the Atlantic out to the Isles of Scilly some 30 miles off Land's End.

The Isles of Scilly are surrounded by lush, golden green underwater meadows of seagrass. Miranda Krestovnikoff explores the diverse wildlife of this paradise as she snorkels with seals in the crystal clear waters of the Scillies.

Mark Horton reveals the extraordinary story of how Lawrence of Arabia, hero of the First World War desert campaigns, went in secret to Plymouth, where he helped develop revolutionary fast rescue boats that saved countless lives.

Dick Strawbridge learns the surprising secrets of the global steam power revolution pioneered in the tin mines of Cornwall some 200 years ago. Dick rides on the Puffing Devil, invented by brilliant Cornish engineer Richard Trevithick; this high-pressure steam engine on wheels was the world's first passenger pulling self-propelled vehicle.

With the aid of some big wind machines, Alice Roberts creates her own perfect storm inside a swimming pool to discover how wild weather far out in the ocean generates the rhythmic regular waves that travel a thousand miles to crash against our shores. Off the Cornish coast, Alice also ventures out into the pounding surf to get some expert tips on how to capture a big breaking wave on camera.