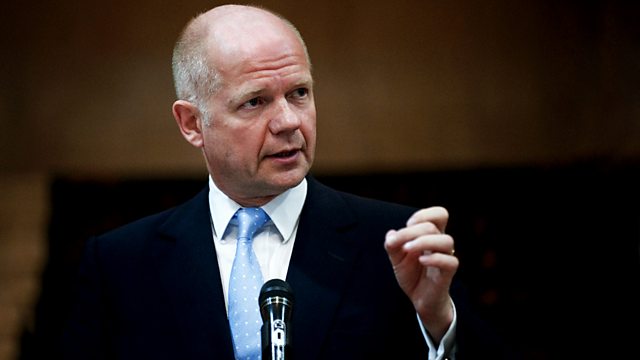 Popular uprisings from Cairo to Damascus shook the West's longstanding foreign policy. Edward Stourton asks Foreign Secretary William Hague what the West will do next.

"The eruption of democracy movements across the Middle East and North Africa is, even in its early stages, the most important development of the early 21st century." These were the words of Foreign Secretary William Hague May 2011. Events from Cairo to Benghazi have shaken the very foundations of the Middle East, and with it the West's longstanding friendships with Arab dictators. But what will happen next?

In this week's Analysis, Edward Stourton meets Foreign Secretary Hague and explores the map of the new Middle East as seen from London, Washington and Brussels. Amid the talk of massive economic investment, customs unions, and a newfound support for democratic transition, what will really change in terms of Western relations with the Middle East?

The "Arab Spring" came just as the world began to recover from the 2008 crash -- with oil prices already high. Edward looks at how the economic pressures will shape our policy, and explores divisions within the EU -- with some nations afraid of opening up to the Arab world, while others are pushing for it.

Support for Israel has long been a cornerstone of Western interests in the region, but recent comments by British leaders and the US President about "1967 borders" have left many in Jerusalem and Tel Aviv seething. In the new Middle East, what future do Britain and the US see for Israel and the Palestinians -- and will it change things enough to make a difference?

Western foreign policy on the Middle East has been through massive convulsions -- from die-hard "realism" that saw close relations with dictators to the "neo-conservatism" that called for the invasion of Iraq. So what is now driving our new vision for the region?