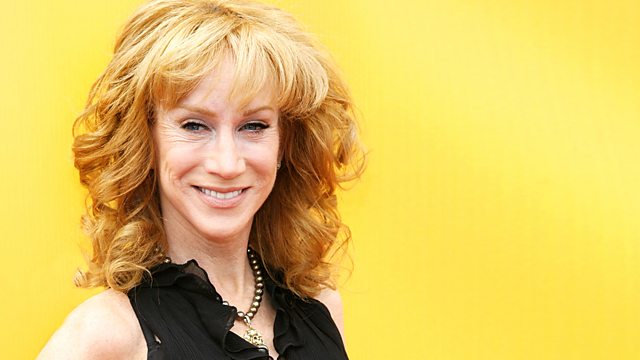 Clive is joined by the comedienne and actress Kathy Griffin. She's a double Emmy award winner for her television series Kathy Griffin: My Life on the D List, she's featured on The New York Times Bestselling list for her memoir 'Official Book Club Selection' and she's been nominated for two Grammys for her comedy albums. Kathy's here in the UK to perform for one day only, with two shows at London's Palace Theatre.

Marcus Brigstocke has got ranting down to an art form, from his Now Show monologues to his team captaincy on Argumental. This time he's having a go at religion in his new book 'God Collar'. His need for it, his lack of it, the myths surrounding it...... Oh and he's about to play Station Master Perks in the stage adaption of The Railway Children.

Douglas Henshall has been on our screens in Dennis Potter's Lipstick On Your Collar' and recently as Professor Nick Cutter in Primeval. Now he's starring on stage alongside Kristin Scott Thomas in Harold Pinter's Betrayal at the Comedy Theatre in London.

Political incorrectness in music are explored with columnist and author Terence Blacker. He talks to Jo Bunting about his two part documentary Taboo De Do featuring songs with the power to upset and offend from jazz to rock to hip hop.

Music comes from the multi-talented singer-songwriter, dancer and actress Fatoumata Diawara who blends her Wassalou traditions with wider influences in her music. She performs Bakanoba from her debut EP 'Kanou'.

And introducing the fearsome talent of Kyla La Grange who brings one of her passionate, epic pop songs 'Been Better' to the Loose Ends studio.